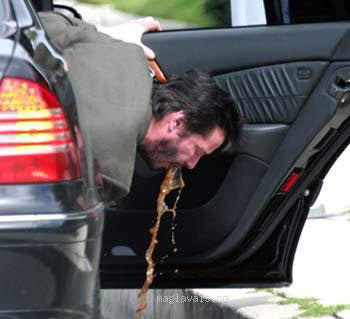 There is no spoon!
Posted by phlegmfatale at 10:47 PM

Yeah, I know it was in very poor taste, but I couldn't resist. My affection for him is undiminished. In fact, for a puking guy, he looks pretty hot.

'Course...I guess my buddy and I cutting that thing outta my heel (properly sterilized with EverClear grain alcohol)with a pocket knife was kinda off, too...

At least he was not driving!

At least he got the door open.

You shoulda seen that submarine sailor I knew one time who passed out on his back and threw up all over his face. He woke up and thought he was blind because his eyes were glued shut.

j.r. shirley - next time you self-surgery, I demand video!

Did anyone think to pick up the chunks to sell on ebay?

quick! someone google it!

It's actually a pretty amazing shot. The camera shot, that is. The puking aim is rather ordinary.

I've been there. Got food poisoning on a road trip once.

barbara - they DID do a good job, yes?

hammer - Puking in public - usually one can't choose not to.

Thanks so much...I'm trying to eat dinner, here!

I have to admit, though - CLEVER MOVIE REFERENCE!!!!

christina - walk it off, woman!

christina - _I_ thought it was quite clever.

silver - Glad ya enjoyed it, missy.

Poor guy...why would someone want to take a picture of anyone puking, celebrity or otherwise?

When something in a picture causes you to want to mimic it, that's quite the action shot. Reason #24 of why it's probably not a good idea to be a celebrity -- you can't even puke out of your car in private.