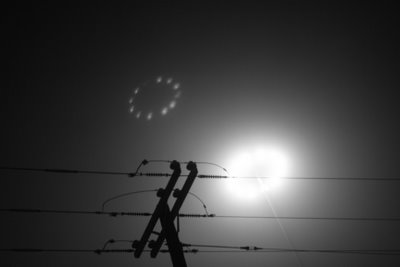 The weather in Dallas was unusually foggy Wednesday and I found myself out and about with camera in tow. I took a photo of the enormous light at LBJ & Preston, and I got a space-shippy future-echo of the light due to its reflection somewhere in the camera mechanism. Coolness. Golly, I love my camera.

I eat sometimes at a diner where you may end up seated next to strangers, and invariably one overhears conversation whether they want to or not. Generally, it's very congenial and invites comment from strangers - a pretty friendly atmosphere. Today, however, I was sitting quietly trying to digest my magazine when a clucking trio of hens were seated next to me.

These ladies were of a certain age and talked about their hysterectomies ("I had mine in '99" one said) as though they were members of an elite club. THAT was bad enough - I had to choke down my lunch while hearing about people's female troubles. Ick.

But it got worse. So-and-so was violently ill and went to her doctor and he prescribed one antibiotic after another until one day, he wasn't even in the office and they referred her to a urologist, who miraculously cured her mystery illness with one little pill. With the same breathless reverence you would use to describe the town's most exclusive caterer or interior decorator, one woman said "urologists are so great!" and the other ladies twittered their hearty agreement.

She went on to say that her urologist had many famous patients, including a rock and roll superstar whom she named. Somehow, I doubt one of England's all-time superstar rockers stops between L.A., NYC and London in Dallas for a quick check of the old plumbing. I could be wrong: said urologist may be declaimed far & wide on graffiti in the hallowed pissing grounds of the rich and famous, but then again, who gives a rat's ass?

I think if I had the sad occasion to visit a urologist, I'd keep mum about the whole event and try to put it behind me, as it were. But that's just me. What do I know?
Posted by phlegmfatale at 12:44 AM

Cool! A spaceship! How much has the Weekly World News offered for the photo? :)

There are few more distressing things than being cornered by what Florence King called the South's "Gynecocracy" and having to hear, in agonizing, lurid, technicolor detail, about things best not talked about outside of hospital corridors.

Especially over a meal.

All we ever talk about is seeing someone nekkid or getting some beer.

Ranger Tom said it all.
Nekkid, beer, the remote, and life is good.

That "light" - it's shooting a ray! OMG, all those fabulous sci-fi flicks from the fifties are washing over me!

Tam - shh- I'm trying to conceal the whereabouts of my alien love chile.
WHY didn't I think of the immortal words of Miss King - she's so brilliant.
ranger tom - I'm fine with you being the guy, and I'm fine with being a girl, just don't expect me to join in the weird overly-personal discussion of body issue. Ew.
myron - o my goodness - I'm going to have to check that out - I LOVE Lee Marvin and Oliver Reed - that's got to be a classic. I'll look it up. Can't wait.

zelda - it's too much, innit?
big dick - oh, you boys!
leazwell - For schmaltzy B movie thrills, nothing beats Mars Needs Women. Three alien thumbs up!

Maybe the reason urologists have such an accomplished career is that the entire field is just one big pissing contest?

For some reason, a lot of folks don't mind the entire world hearing about their most intimate of problems.
Whether they're yakking on a cell phone or sitting chatting with friends, they'll tell it all to the world.
My grandmother is the same way. She has no issue taking me out to lunch and then telling me (in great detail) about all of her recent medical issues, most of which have to do with her ass and what comes out of it.
But more than that, the ones who really amaze me are the ones who talk on either the Nextel or their cell speakerphones in public. Because it wasn't bad enough to know one end of the conversation, now we get to hear both. Dick and I went out to dinner a month or so ago, and there was a woman in there talking on her cellphone and had it on speaker the whole time. For no good reason. She could have just as easily put the phone up to her ear. The only thing I can think of is she wanted everyone to pay attention to her and know what she was doing. Otherwise, it's completely uncalled for.

Whew! That was long!

dr. strangegun - It could be, but that theory might not hold water

kelly - you've hit the nail on the head - I think people WANT other people to overhear and know their business and how important they are. It's just annoying.

OH, and Kelly - were you tempted to contact the restaurant manager? I suppose it depends on the place and the occasion, but i would have been sorely tempted to complain to the management. People should't have to be told not to be so rude.

Oh there's nothing like trying to eat with my mom telling me about step-dad's new bladder infection! It takes a full minute to get the courage to swallow what ever you get caught with!

Nah, we didn't say anything. I'm sure I mumbled something under my breath about "the bitch on the phone".

I will make it a POINT to talk about that kind of thing in public when I am older!

When else can you get away with it?