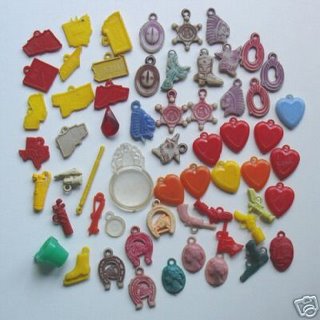 Remember the little toy surprises you used to get in boxes of Cracker Jack? Well, apparently they don't bother with the surprises any more, which is a pity, considering I always thought the cheap, crappy little prize was better than the caramel corn, anyway.

Sometimes you'd get a little mini-pinball game, sometimes a charm or a gaudy fake ring - but it was great stuff. Oh, and the lick-n-stick tattoos - ya gotta love that!

Then there were the little joke books. I still remember the most shocking joke I ever got out of Cracker Jacks:

What does a man do standing up, a woman sitting down, and a dog on three legs?
If you're like me, the first thing you think of is urinate. Of course.

Well, that was too easy. The correct answer was shake hands.

I will always believe, though, that they wanted you to think the first one rather than the latter, don't you agree? That couldn't have been an accident.
Posted by phlegmfatale at 12:20 AM

As a major league fan of MLB I was excited to try Cracker Jack. We don't have it in England, so a couple of years ago I went to a mets game and obviously ordered Cracker Jack.
What a disappointment! Yuck.
The nachos were OK though.

You know, ben - Cracker Jack tasted much better 35 years ago - recent tastings have revealed the caramelizing to have a burned quality which is not at all appealing to me. Oh, and do they even put in peanuts any more? Cheap bastards. If it ain't broke, don't fix it. Put the peanuts and prizes back in and see what happens. Oh, and stop burning the caramel!

Yeppers they were much better years ago. Of course so was a lot of things. Now that we are on this live forever train we sacrifice taste and enjoyment for healthy crap.

I used to take out the "prize", eat the peanuts and give the leavin's to my little sister.

We used to fight over the tattoos as kids. They were sooooo very cool and the most favorite of the prizes.

I was never a fan of Cracker Jacks either. But I always liked that foldup page at the back of Mad Magazine.
But what I'm having trouble wrapping my head around is, why would a woman shake hands sitting down? Doesn't one stand to shake hands?

Cracker Jack used to be delicious. It was always the biggest treat, and the prizes were delightful. I had no idea they stopped giving them.

But now that I'm on the South Beach Diet, I am not supposed to eat Cracker Jack anymore.

I think the toy was used as a distraction from the horrible taste and texture of Cracker Jacks. And did you ever have the pink coloured candy pop-corn? *gag*

I probably appreciate the photo more than anyone else...you know how I like junk drawer shots!

I used to love the candied popcorn, but always threw away the peanuts. And the folding back page of mad magazine was always fun. I always loved playin' with the magnifying glass prize. Haven't eaten Cracker Jacks in 20 years.

lilfeathers - Yeah, really! Pa-tooey - I say "yuck" on all cardboardy tasteless crap. No thanks!

myron - sounds like something my brother would have done

kelly - yup, the tats were THE coveted prize. And remember how you would smear them, half the time? Ah, the golden days when the cheapest treats were the most satisfying!

barbara - I liked the fold-up in back of Mad, too. Sitting down-era hand-shaking for ladies probably dates from the Emily Post period, where a seated man would stand when approached for a handshake by another man.

zelda - Yeah, I agree - it WAS better. I don't get how they don't notice they send out burned product these days.

dave - brilliant point, and I think you are right. Oh, and that pink popcorn???--I just kinda puked in my mouth when I read that.

mushy - you want junk? I got a lot of junk right here. Just you wait.

fathairybastard - Wow, you threw away the best part! If you want my advice, leave your memory of Cracker Jack in the past - trying it again you'll only wonder how you ever choked it down in the first place.