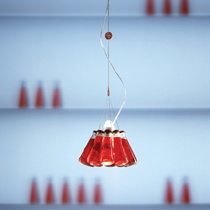 Thanks for all the nice comments on my maiden attempt at audioblogging. That was actually fun. Imagine how wound up I'd be if I still drank coffee. Yes, I know: I'm a chihuahua.

I am filled with longing for this adorable pendant lamp which would look quite fetching hanging between my kitchen and dining area. It's a Campari light, a cluster of 10 clear glass bottles of red Campari soda surrounding intense halogen light. It's incredibly cute. Don't you think I deserve one of these? Or two? Or three?

New topic.
A friend from high school was a gymnast and dancer who majored in dance in at university. She met and married a print/runway model, and soon they were expecting a little one. She's a rather sophisticated person, and I hope the story I'm relating to you is indicative of her sense of humor as an adult and not of an abiding passion for weird exhibitionism.

About 12 or so years ago, she was expecting her son and appeared on the Jerry Springer show in an episode on pregnant moms who were proud of their bumps. She came out on stage all spindle-limbed with a long scarf doing an Isadora Duncan routine in a bikini. 8 months pregnant. The whole damned town was talking about it.

I have nothing to add to that.
Posted by phlegmfatale at 12:15 PM

When I was pregnant I was proud to show off my bump, but going on Jerry Springer, well that's a little nuts if you ask me.

Those lamps are cute. Go on, treat yourself to a few.

Kudos to you and your twirling expectant friend! Whats life without a little intrique??

That is cool. You should do something really epic with it, like buying 100 of them and arranging them into a big campari-halogen-georgia-o'keefe-vagina-flower. Imagine the heat that thing would radiate! Kind of a good metaphor now that I think of it.

You must have at least three of these lamps immediately. Some things, PF, are simply necessities. The lamp is in that category.
(Spoken by a woman who, when broke, will buy flowers but not bread)
And I love the story of your friend's appearance on TV in full-belly, full-Isadora. The goddess lives!
PS - I am devastated that I couldn't hear your audio blog!

Jerry Springer does serve a positive social service, if only to be the world's best antidepressant not in pill form.

Ok, just say you're so feeling shitty about yourself and your life... So shitty you're thinking of chewing on a revolver barrel for Sunday Brunch.

What you do then is put on Jerry Springer and watch for 15 minutes. That's all your going to need to make yourself realize you're life was nearly as pathetic and worthless as you thought before you put his show on.

Yay! I don't really like Campari tho' - had a half full bottle for years now.

turboslut - I get dizzy just thinking of her twirling that mess around on Jerry Springer. A pregnant body is beautiful, but a time and a place for everything, hopefully. Yeah, those lamps are pretty cute, but they be expensive - I may have to Gerry-rig my own version.

schnoobie - well, yeah, good for her for enjoying herself. There IS something to be said for letting it all hang out.

dv - I think you are a brilliant soul and I'll go you one further - we'd need to set up a humidifier to make sure the air would remain sufficiently moist. We'd also have to strictly maintain proper pH levels in the room. Good call, babe.

lj - I clicked on it just now and the audio blog is still there - it just took for-flipping-ever to come on. Try again. Yeah, I'm with you - flowers can be a lot more restorative than bread, so sometimes what rates as necessary doesn't follow the usual order. I'm the same, hon.

ranger tom - Yeah, I'm in agreement that by comparison, it's awfully easy to feel better about one's life when you look at shows like that. It can be quite bracing.

frobie - *L* I've got half full bottles of Rose's lime juice and all kinds of things that will neer be touched again until they play their swansong mid-air to the dustbin. Glad you liked my dip-shitty little audio post. MOre of that magic to come, no doubt.

I hope to do the exact same thing when I am pregnant!

It seemed like my whole body was a bump when I was pregnant.

I seem to see pregnant woman wearing less and less nowadays.
It's a nice trend, in some cases.

heatherb - well, more power to you honey. We'll be watching for you on Jerry springer!

shpprgrl - I'm sure it feels that way, like the pod people have invaded (un?)fortunately I don't know anything of the pregnancy experience