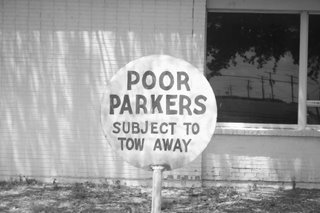 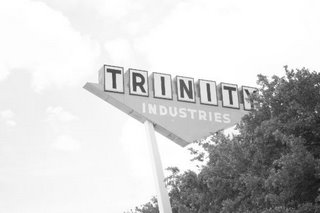 I had to post these. Today I went due west from downtown Dallas toward Irving on Industrial, which turns into Irving Boulevard. Trinity Industries has this sputnik-era sign on outward sloping legs, which you can't get a sens of because of the tree.

Anyway, I stopped in the parking lot to get this picture, and then I noticed the rather stern lollipop parking sign giving a warning about poor parking in much the same way I would. Except I'd have a picture of a nun with a ruler in her hand. But the threat to tow would be unchanged. Another cool thing about this sign is the font looks 1920s era to me, though it really could have been lettered anytime up through the 60s. It's super cool. I wish I had this sign for my garden, because that's the kind of hairpin I am.

omg - anyone besides me simply foaming at the mouth to see who gets booted off Project Runway next week for cheating? It's GOT to be Angela. Can't believe she dodged that bullet again. Sheesh.

Oh, and finally, yesterday I told husband to "get the lead out" meaning to haul ass - he said he's never heard that expression, ever. He was born in Dallas. Any of you ever hear that? I've heard it aplenty since I was a young'un. Seems pretty common to me, but maybe I'm strange...
Posted by phlegmfatale at 12:04 AM

When are we going to do karaoke at O'Malleys?

Oh, I so need to post a shot of the neon sign outside the Buck N Ruck liquor store.


I've been meaning to do so for quite a long time now!

I love the space age signs! There is one not far from me, in front of Johnny Rocket's car wash, which is a HUGE rocket ship. I hope it never comes down.

We used "get the lead out" all the time. And then of couse, they did.

I was born in Denton and raised in Denton, Dallas and Houston. Heard it and used it all my life. Which has probably lasted a lot longer than yours.

Get the lead out is one of my faves.

Love the signs.
And yeah..."get the lead out" is common here.
However, "hairpin" used to describe a person (you, in this case)was a new one for me and left me snickering.

Yeah, I've heard of it, but I've lived all over and don't have a clue where it came from.

As you well know, I grew up here. I don't recall having to be told what that term meant. He was just language deprived (no, dear, I meant deprived. You get the A).

I grew up being told to "Get the lead out!"

I've heard "get the lead out."

KLPX used to have a Led Zepplin special on Wednesdays called "Get the Led Out."

You are strange, but get the lead out is about as common as how's it hanging and just as stupid.

Oon the other hand lead is kind of like read and both of them parse depending on context so it's okay.

I don't really care, because chicken is back in Dallas.

nongirlfriend - yeah, that one too, except my folks never said it - no swearing at our house, believeit or not. Karaoke at O'Malley/s? We'll have to have a blog party there! Buck'n'ruck? Don't deny us, you big tease!

Barbara- please post a pic of the rocket sign? Oh, and remember the olfactory post about how much better the gasoline smelled with lead IN it? *L*

dick - aint it amaizng? Im marveling that it was new to him,.

fuzzbox - yup, it's a classic!

lj - so even in the north it's said? Cool. Glad you liked the hairpin thingie- my mom says that all the time.

becky - It would probably be hard to pinpoint its origin, but I'd bet it's a pretty old saw

liz - yup, deprived. Iknew it wasHIM was the oddball. And just like the smeller's the feller, I find it odd you noticed the "ho" thing twice - is there something you want to tell me, while you're "just sayin'?"

lightning bug's but - Yeah , get the led out was on a Dallas classic rock station too back in the day!

shpprgrl - I should have some spectacular photos from my trip to Arkansas this weekend. Watch this space.

nein - You say I'm strange? I hope you won't mind if I take that as a compliment.
yup , old chicken is back, and I hear she hangs out at O'Malley's! *wink*

I LOVE that fuckin show. Can't believe that one dude got away with throwing shit togathar at the last minute and the judges slobbered all over it. Does this make me gay? Naaaaa.

Sure, "get the lead out!" Been all over and heard it a million times. Maybe he just moves fast and no one ever felt the need.

anonymous - Yeah - awesome show. Oh, and totally, it WAS thrown together. I'm kind of annoyed with him- he's such a lukewarm navel-gazer. I'll bet he spends most of his time sitting around smoking weed and listening to Phish. He's dull dull dull.

Nah, he ain't THAT fast.

Next time I go past that rocket carwash place with a camera, I shall snap a pic, just for you.