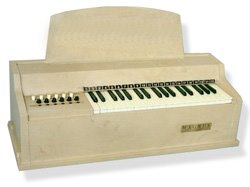 Heh heh. I posted organs. Organs on parade. Unintentional, but I'm leaving them up. Blogger must've hiccuped. This can be the Busby Berkley of blogs.

I figured it out - what is so incredibly compelling to me about the sewing machine song from Imogen Heap, which I will post in a separate entry above because I'm too much of a 'tard to figure out how to post my own text below a yootoob link.

When I was about 7 (1972 or so) my mom and pop gave me a Magnus Chord organ for Christmas, and I could play with it for hours. The keyboard was almost 3 octaves and the buttons on the left played chords - black were minor and white were major. Mine was identical to the one above except mine was a much more tasteful dark brown.

Although I've always been musically inclined and would later learn rudimentary piano, at that time I demonstrated no talent for keyboard because I was droolingly content to sit and listen to the tonal relations between chords and notes, and the sound of the air whooshing through this organ was particularly fun. It amazes me how something - even a basic electronic such as this - can produce such an organic response. Just listening was enough, and I didn't need the prison of notated music to limit my enjoyment. Even today I can sit and listen to simple chords at a piano and marvel at the sound.

Anyway, the shift of the keyboard and microprocessing of this track- Hide and Seek- is remarkably evocative of that little organ.

Even if it's not your cup of tea, listen to it at least 3 minutes in, the pace of this song changes at about 2:55, and I think it totally gels at that point. I could listen to this one song all day. She creates a brilliant soundscape, and the words are equally compelling. Then again, no doubt you are a more critical listener with more demanding tastes than myself. Still, I think it's worth a good sit-through, at the very least, not being the usual shit they try to spoon-feed on the radio.

Is she singing about a failed relationship, or about a dead loved one, or about God? I can't tell, and I don't think I want to know. I just think it's brilliant and the mystery only heightens the spell she's cast. Enjoy.
Where are we? What the hell is going on?
The dust has only just begun to form,
Crop circles in the carpet, sinking, feeling.
Spin me round again and rub my eyes.
This can't be happening.
When busy streets a mess with people
would stop to hold their heads heavy.
Hide and seek.
Trains and sewing machines.
All those years they were here first.
Posted by phlegmfatale at 12:06 AM

Damn my silent computer! Those are just fabulous lyrics.
And it's hard to say whether it's life or relationship she's talking about...
Seems the reference to trains and sewing machines is purely personal..
but it's really intriguing writing.

Nice looking organ you've got there. I didn't know this waht that type of blog ...

I know absolutely nothing about music and thank God for that.
I mean, look what I've done to the internet.

After you enter the code for the video, hit Enter a couple of times to get space under the video and then enter the text you want. Or put it above the video like I did on the Way Cool Guitar and Rescue Me videos I put on my blog.

I had an organ like that too. I started playing it when I was two or so, and eventually, moved upward to a baby grand that Queen Esther got me for my b'day. I have been playing it ever since.

But that organ was so good for me when I was angry. I was able to slam out some pretty violent chords on there.

mother plays the organ in the methodist church

that has twelve syllables, and I will consider it my entrance to ask these two questions

Does anyone know who did the thing about "lawn chairs are everywhere, and my mind describes them to me"

"vd must have got to doctor idi amin, dada, dodo"

I can't google either of them and I would kill for a copy.

now for the you know what that I hope I pass

Oh yes, I am definitely a more critical listener with more demanding tastes than you.

*goes back to listening to The Greatest Hits Collection: TV Commercial Jingles*

I, too, had a chord organ. My dad's mom had it for the longest time, and then gave it to us kids. I taught myself how to play Mary Had a Little Lamb, and the first chords of On Top of Old Smokey. Then mom and dad sold it. We somehow procured an upright piano in dire need of repair & tuning. I no sooner grew attached to that, and that, too was sold.

And that, my dear, is the beginning and ending of my parents cultivating a musical interest. Now the only musical instrument I play is the Ass Trumpet, and the only tune I know is variations on Pull My Finger.

lj - she's a brilliant and original artist. LOVE her. Wish you could hear her - I think you'd find her tremendously appealing.

david amulet - this is precisely THAT kind of blog!

dick - whoknows - you may be a regular ludwig van if you'd get on a musical keyboard instead of a 'pooter.

nein - really? Yer ma's an organ player? Did you just invent dodecadent gooberameter? Dunno those lines you quote, but they sound like real barn-burners!

mj - well, I know some people find my tastes a bit kooky, but I can sing jingles along with the best of them

nuggetmaven - allthe cool kids had chord organs! Sweet! Sorry your parents thwarted your musical pursuits - how kooky of them. Not good-kooky. Bad-kooky.