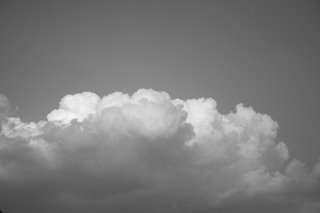 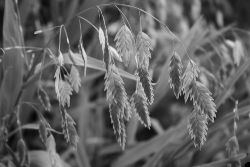 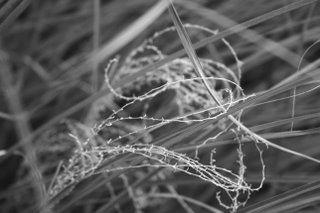 Believe it or not, this post concludes with real life pseudo-celebrity gossip. Are you excited? I knew you would be.

Today was my second time trying B&W with my new hotshit camera. The clouds were interesting, but husband says I need a yellow filter, so I guess I'll grab my bonnet and fetch one tomorrow. The papery pods of the second image are Sea Oats, a beautiful wild grass perennial I have near the pool. I love the way they shudder in the breeze. Lastly is another perennial prairie grass which looks to be birthing paisleys all over the place. Love this one too.

Went to see Lady in the Water today, and although it wasn't pure genius, it was fairly engaging to watch. More "schlock schlock horror." I sorta figure if I notice I'm dying to pee early in a film, well, it's the kiss of death. So I had to pee about 4/5ths the way through. Not SO bad. A bit juvenile and pat, it still manages to be more engaging than most of the crap that makes it to big screen. Like The Village, I think this is more a message film, but so long as the preaching is not overt, I can live with it.

I was hoping to see the new pirates movie, but it had been running 20 minutes when I arrived, and I'd have to sit around waiting 40 more minutes for the next showing, so I played cinema roulette, where I just go to whatever is coming up next. Haven't done that since my bachelorette days. Sometimes I'd see 4 movies in a day. Loved that. Nearly had to go see the Owen Wilson movie. Dodged a bullet, there, since it had the same starting time as the Lady movie. Sheesh.

By the way, a girlfriend of mine went to a wedding reception at the grand home of the Wilson family, of Luke and Owen fame. The family manse is a sprawling mid-century modern affair that is immaculately turned out and overlooking a large parklike setting in one of the toniest areas of Dallas. There is an awkward segue between "levels" with one barely noticeable step up about 2 inches, and my girlfriend's husband tripped as he walked along with a plate ful of food. He leaned over quietly and said to my friend "I guess we know now how Luke broke his nose."

ROWR!
Posted by phlegmfatale at 12:50 AM

If I were you, I'd be making sea oats jewelry. b/w is sooo right sometimes.

M. Night Shamalalamadingdong has said that the movie is written for pre-teens and young adults, so no surprise that it's juvenile there.

As for the Wilson boys, I just don't get the hype. Their teeth are too big for their faces, they both talk like they're either stupid or on drugs and they ain't that great. So yes, I'd say you avoided a whole barrage of bullets.

I wasn't even aware that Owen had a brother, so I guess it's true. I really don't give a damn about celebrities.

Lovely photos.
Wooo...Wilson's manse. How exciting!
Nice that you had a movie day.

I may go see that movie now....all the reviews I've read have ripped 'ol M. Night a new asshole.

But you were rather kind. :)

The grasses are amazing! Such detail.

Excellent comic timing that your friend's husband has hahaha!

leazwell - Yeah, seaoat jewelry would be amazing. I may try to run that up in beads sometime soon. I'll have to makeone for you! Brilliant suggestion!

o.g./kelly - *L* Yeah, that makes sense, now that you mention it. I suppose it's their very normality that makes the wilson boys appealing. They obviously have a great sense of humor, anyway. I liked shanghai noon, even though it was super cornball.

dick - yeah, there's at least 4 semi famous wilson brats - a daughter who is a photographer in addition to the acting sons. They are a phenomenally talented lot, actually. They seem quite likeable. Oh, and you're the last person I'd accuse of being a starfucker.

jacquie - yeah, the wilson family is full of big wheels in Dallas. It's a funny story, I think. Glad you like the pics. I hope to have many movie days in future. I haven't been to see a foreign film in cinema in, like, 3 years. Sacrilege!

big pissy - Glad you liked the pictures! I think sometimes it's best to ignore the reviews. I didn't expect Lawrence of Arabia, but it starred the guy who played "Pig Vomit" who is such a phenomenal actor that I'd see anything he's in.
The WIlson story is priceless, in my book.

barbara - Glad you like my grass - it's so pretty in person. Yeah, her husband is quite the charmer, and so is she.