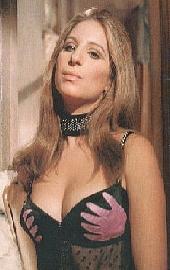 S'funny the crap people post online (ok, yeah, I know how ironic it was for ME to say that!). For example, this choir robe which for some reason brought to mind the outfit Barbra wore in The Owl and the Pussycat. I'm all for artwear--heaven knows I can put together a get-up--but people should give a great deal of thought to embellishments on robes a choir will wear whilst sitting in front of a congregation. During moments of desperately quiet boredom, the mind might tend to stray a little...

Oh, and did anyone ever notice that Neil Tennant from The Pet Shop Boys sounds just like Al Stewart, the guy who sang The Year of the Cat?
Posted by phlegmfatale at 12:02 AM

UUUUUUUUUUmmmmmmmmmm I agree the robes surely need much thoughts put into them.
Not to be mean but who has the contract on the errr patterns applied.

Your mind travels in some unusual routes.LOL

Barbra (or is it Barbara?) has a nice pair of tits.

I said hello to Neil Tennant at Heaven nightclub once - but no I don't think he sounds anything like Al Stewart, much more nasal-y.

this is funny! Good sense of humour.

The Tennant/Stewart sound-a-like. I'd never noticed but you're absolutely right! That same nasally tone. They could stand-in for each other at recording sessions. Neil pulls a sickie and Al fills in for him. That sort of thing.

I actually hadn't noticed that voice similarity, but now that you've put it in my head, I can't stop thinking about it. Whenever the Pet Shop Boys pop up on my iPod -- I have a few of their songs, but no Al Stewart -- I'll have this connection in my head!

Nothing is new. Art is reconstituted.

This church should think of changing it up a bit. I would like to suggest a butterfly or more appropriatly in keeping with the theme; an Io Moth. The eyes on the wings of the moth could be quite eye-catching.

patty - It was just unfortunate placement of a questionable design. Maybe one dove on front, one on back, but the cup effect is impossible to ignore. I'm amazed this design saw the light of day...

ben heller - unusual, yes, but I've got to follow my muse

frobie - You know, in certain photographs, young Barbra looked absolutely stunning - that mod-look with the thick egyptian eyeliner and very sculpted hair was a prettily dramatic foil for her odd features, and yar, a pretty smokin' body back then. Her dragon-lady fingernails always freaked me out, though.
Oh, you're right - NT is more nasal than AS, but the diction and delivery seem similar to me.

will powers - glad ya liked it, hon!

mj - AND, has anyone ever seen them in the same room together? Huh? huh?

nongirlfriend - you're right, but we like to think things are new because we are societally A.D.D.

At least I am ADD.

pure eyvl - why does your moth suggestion sound worse than their two doves clapping ideer? *L*

Spot On Phlemmy!!!! I love it when I get that kind of revelation too. OK here goes......Eddy Vedder= Neil Diamonds long lost son...only cause they look alike to me....not so much the sound alike...heres another lookie likey:Sarah Jessica Parker = Ruth Buzzy....I know cruel but funny .....right?

Gee, Barbra, you don't look like you need a lift to me...

schnoobie - I don't think I know what Eddie Vedder looks like, but I love his voice - sexy voice. *LOL* SJP & Ruth Buzzy are both lantern-jawed, so I can totally see that. Wonder why I never thought of that. FUNNEEE!

I read a scene from Owl in my acting class a week ago, so I've been wanting to see the movie now. I wouldn't have expected Babs to dress in that...

becky - I love the old Owl&Pussycat poem - it's cute.
We'll want a full report of how babs' performance stacked up against yours!