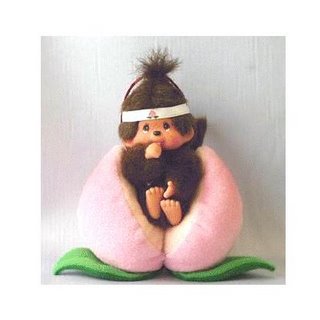 I was going to write something funny about monchichis and I came across this image that stopped me dead in my tracks. Any thoughts?

I went to IKEA this afternoon, and I have to say I'm having a bit of a love/hate thing with that place. I like the 4 wheel steering shopping trolleys, but they feel wonky and a little hard to control when tourists sashay into your path and plant themselves. I also feel like I'm walking on a hillside with those carts - like the wheels on one side are facing the hilltop, and the others are facing the valley, and it's itching to go downhill. Perhaps I need a tutorial on trolley pedagogy.

Oh, and also I just went in for a few things for organizing the kitchen and spent longer in the line to check out than I spent driving there and selecting my crappy items. Urgh. I normally would never go on a weekend, but insanity strikes!

Oh, and what is up with unattractive people vexing over mirror choices? Must they equivocate? Buy the frosted mirrors, darling, lest you smeg up the flow of chi.

Finally got back home this evening in time to enjoy a sunset from the pool's eye view. I floated on a couple of noodles (those big foam spaghetti thingies) and looked up at the sky with the radio on. I saw a fiery orange-pink ring of clouds blazing with the last rays of the day, and on JACK fm, someone was singing "Smoke on the water and fire in the sky." Ah. Perfect!

Posted by phlegmfatale at 12:11 AM

All for some bloody candles and a tacky shelf unit.

Ya have to love Jack for the selections they toss out, don't ya?
I've been to Ikea once, but was fortunate enough not to run into the crowds. I need to go back because they have some track lighting I want for the kitchen.
As far as the uglier of us and mirrors... Why even bother, it won't get any better and damn sure won't help.

The pool moment sounds like a sooundtrack of your life-type-of-moment. How lovely!
I too have a love/hate relationship with IKEA. When it was on the far side of town I used to go all the time, and since they've moved to my end of town, I've gone once. It's too big now!

What is that thing supposed to be?

Now that damned song will be in my head all day! Happy 4th!

I know that monchichi is in a peach, but still....

ben heller - Yeah, NOW I know about IKEA and Sundays. When I've gone before, it's been almost serene with very few customers early on mid-week mornings. I'll be wiser in future.

dick - learn from my mistake and go at opening time on a Tuesday or Wednesday. Yeah, thanks for mentioning Jack - it's really good and it's nice to hear the stuff that never gets trotted out by other stations - it's the only fm music station i listen to now.

barbara - yeah, it was a cool thing - I felt like an old hippie for a minute there! The Ikeas are all monster stores, now. Fortunately for me, I have a keen sense of direction and I know all the shortcuts for an easy in/out expedition. Still, it's all better without the throngs of humanity.

tam - at first I thought it was a monchichi being born, and then I noticed the petals that it must be a flower of some sort, but it looks rather vulgar, doesn't it? Anyway, kelly informs us it is meant to be a peach. Indeed.

nongirlfriend - Fortunately for me, I don't even KNOW that song! Happy 4th to you! Going to Trinity Fest for the big fireworks display?

kelly - Yeah, it looks vulgar - I was astonished. Can't believe this one got past the design stage.

Monchichi, Monchichi
Oh, so soft and cutley
With her thumb in her mouth, she's really neat.
Fun to wiggle his little feet.
Ya, ya, ya. Ya, ya, ya.
Happy, Happy Monchichi.

It looks kind of like a Georgia O'Keeffe painting.

I love how IKEA stuff looks, but I hate how they fall apart.

lightning bug's butt - You look so cute when you croon

zelda - Wow, it IS very Georgian! Yeah, Ikea stuff is cheap and no mistake, but they do have some great stuff that'll work in a pinch. Now where IS the power drill?

I have always wanted to go IKEA ... with any luck some day I will be one of those annoying tourists :)

I am pretty torn about Ikea myself, you said it so well.
The key, I find is to nail it down as coldly and efficiently as a grocery store trip.
The monchichi pic you found is rather horrifying - Georgia Okeefe meets Mattel? I don't know. Kid's toys (esp. when I grew up 70's/80's) were really weird..

Please tell me you did not purchase that, that, whatever that thing poking it's little head out of the felt vagina flower bud looking object --- what were they thinking?

heather - then here's a tip, go prepared for a lot of walking, and if you're going to stand drooling in awe of the enormity and the spending potential, do so out of the middle of the traffic aisle! You'll have fun - I've gotten some great things there that make life easier, most recently a wall-mounted rod with s-hooks to hang kitchen utensils from and a companion spice rack - never had a wall-mounted one - which i needed desperately

jacquie - Yes, the machine-like efficiency of my IKEA trips baffle friends/family who go there with me - I spirit them past the tourists and through the short-cuts, lest we be caught in the IKEA tractor beam that sends dazed masses ambling throught the place at a snail's pace.
Yes, the Monchichi - I was going to post a companion pic and talk about how the Olsen twins look like Monchichis, when I came across that photo and it utterly derailed me, such was my amazement.

kim carney - you know me to make foolish and frivolous purchases, my dear, like my Archie McPhee fetish, but I've never paid a dime for a Monchichi - I just thought that one was too horrifying not to share! It's nasty.