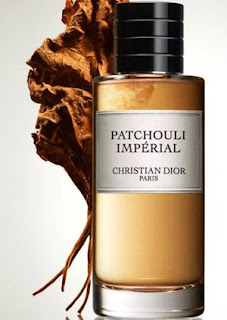 I'm going to have to give a full review later, but so far, Patchouli Impérial seems like a winner.  Though it's marketed for men, I don't let those sorts of labels limit me.  In truth, there are some fragrances I've worn once then said "definitely for a dude" and bequeathed the sample on Himself, but I always let my nose make up my own mind. It would be criminal to allow labels to spoil one's pleasure, particularly in a medium which can impart such delights.

Fig leaf/tree is not listed as an accord in this one, but at the opening, I'm definitely smelling something akin to that scent, and I'm loving it.  The way scent works is the smaller molecules zing past in the beginning, and the bigger, fat molecules emerge later after the flighty top notes have evaporated.  I expect some beasting patchouli and sandalwood T minus 2 hours.  Top note of coriander is massive in this -- LOVE it.  Come to think of it, my nose may be confusing the coriander for fig leaf. Anyway -- more on the outcome later.

I bought a lovely 5mL sample on Surrender To Chance last week for about $12. At $400 a pop, I won't be acquiring a 200 mL bottle of this anytime soon, but I will be savoring my sample, if all goes as I expect it to.

End-of-day update: about 14 hours down the line, most of this fragrance has evaporated, but there remains a faintly sweet, musky patchouli. It smells just slightly funky in the way that honey smells a little funky, you know?  I'll be keeping this one for myself.   It's gorgeous, and I'm pleased to have this large sample.  I'll get quite a few wearings out of this, but my student status renders this far too dear for my impoverished state.  For being a straightforward patchouli fragrance, it's one of the prettier and more subtle I've smelled.  This is a fragrance that announces its wearer as a dyed-in-the-wool-but-the-dip-didn't-take Bohemian.

For those who wondered, I won't insult Himself by giving him this one-- he'd only snort at me anyway.  And I'll wear this again, just not as much as Coromandel or Calamity.
Posted by phlegmfatale at 8:07 AM

Four hundred bucks a bottle? Methinks you could burn a LOT of patchouli incense, let it waft through yer hair, and save a TON o' money.

Buck - it just wouldn't be the same.

Farm.Dad - you were Farmy when Farmy wasn't kewl. :P

Peter- working on an idiotically small screen, I somehow accidentally deleted your comment. I think there would be a major hiccup in the time/space continuum if Himself wore patchouli... then again?