I get it. I really do. The gripping besotment with photoshopped beauties. If what you want in life is a partner devoid of character and experience. If you want a blank with no frame of reference which you will have to regard. But I don't know why anyone would want that. How could someone devoid of evidence of having weathered even a tiny bit of life put up with you and all your flaws? Seriously. The blank little thing would run screaming, because she'd lack the depth to think there's anything worthwhile beneath your surface either, thank you very much. The thing I don't get is-- what is the point of images of a woman or man where all the lines of age and experience are ironed out with chemicals and vaselined pixels? 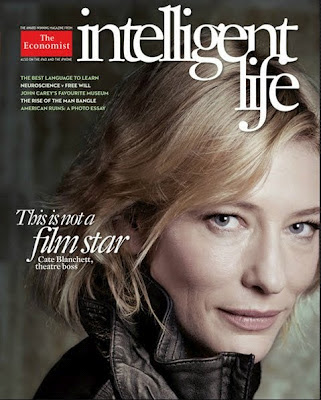 Great heroines and heroes of literature and film and real life are not blanks. They've generally got a few miles under the hood-- which makes their heroic journeys all the more heartening and stirring. Why would you want something cartoonish and not-found-in-nature? So much more fetching to consider falling in love with the one, the only, the original and all of his or her flaws and human failings and the laugh lines and the silver at the temples. The lived-in look is always more comfortable and much more sexy, if you have the backbone to recognize it.

At 42, Cate Blanchett has appeared sans Photoshop on the cover of The Economist's bi-monthly mag intelligent life.

Helen Mirren looks amazing. Judy Dench does not shrink from the occasional dowdy role (and never has), yet is still a beautiful woman and sexy in the Bond films, don't you think? Joan Plowright at 80-something is still kicking it and manages to be quite the fetching lady. One can easily imagine an august gentleman being smitten to a school-boyish degree. Charming!

Rita Moreno? She's about 80, and she is still smoking hot. Doubt me? This photo of her was taken in January. If you don't see that she's still incredibly beautiful, you are either blind or too stupid to be regarded.
Anyway, all of this is by way of saying it's nice to see a real beauty like La Blanchett being real and represented on a magazine cover.

Agreed! Cate looks amazing and I love her even more now that, in a world where we worship those who can play pretend well (aka:movie stars), she is willing to get real and show the world what true beauty looks like!

I have earned every line and gray hair. They each tell a story and those stories are my life.
If anyone doesn't like my wrinkles, oh well

She's younger than me so she must (still) be cute!

On the one hand, I agree about the beauty of Cate Blanchett, Rita Moreno, and the others. Also, I will note that streaky salt-and-pepper hair is the hottest thing there is.

On the other hand, I have to argue against phrases like "if you have the backbone to recognize it" and "you are either blind or too stupid to be regarded."

Beauty is subjective, not objective. People like what they like, and pretending otherwise is an utter disaster if you can't keep it up. I tried that once dating a woman I really liked, except for her looks, and hurt her (and me too) so much worse than if I had just admitted that from the start. There's a place for pretending; if things change in a marriage and your tastes don't change with it, then you suck it up. But who wants someone who isn't excited about you from the beginning?

Reportedly, Sophia Loren (!) was on CSI Miami the other night, and still looks great!
At 70!

HJohnson - She is stunning, indeed.

Farmmom - You are lovely exactly as you are. Your pickles alone would make anyone love you. Well, anyone who likes pickles!

DirtCrashr - is that your sole criterion? :P

Andrew Vanbergen - point taken-- I fired off that post after a night of little sleep and before rushing into class so I must admit on more reflection, I would not have chosen such pointed terms. You are absolutely correct that taste in beauty is subjective and completely personal. My overarching point was one that it's better to love something accessible and real than to fixate on something artificial and unattainable. Again-- my opinion. However unlikely a hope may be, it's quite possible that someone who resolves never to marry unless it be to Brad Pitt or Megan Fox is set for a happier existence imagining what might have been.

I love the way Shakespeare said his lover's eyes were nothing like the sun. I took that sonnet to mean that although he did not liken her to the great beauties of nature, her essence held greater charms for him.

Guffaw - She DOES look amazing.