A Texas farmer is trying using bees as guards to deter would-be thieves bent on purloining equipment on his farm for scrap metal. Apparently, the bees don't like the racket of the metal and will wreak havoc on the source of the noise. I suppose the farmer had better bag the bee boxes and move his own equipment at night.

Still, it's a neat idea. I've been dismayed by the recent years' news reports of honey bee populations in decline throughout the world, which I think may spell something ominous for agriculture.

I do hope one day to have a little place in the country with a proper kitchen garden and an apiary. Bees are so adorable.

It seemed I got stung by honey bees a hideous number of times as a child, and I hated them. I was, after all, a typical Southern child in the summer, barefoot in a clover-filled yard. Stings were inevitable. As I began to dabble in flowers and herbs as an adult, however, I was quite taken with the industrious charm of bees, some of them impossibly tiny varieties. They go about their business, workmanlike and undeterred by bothersome humans, heavy-laden with waxy saddlebags of pollen festooning their thighs. What furry little marvels they are.

And bumble-bees? The ones scientists declare should technically not be able to fly? Bless the fierce little contrarians! 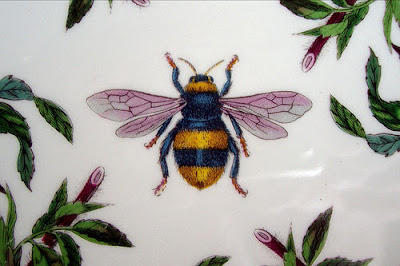 Posted by phlegmfatale at 4:15 PM

Gotta love bees.
No matter what they're headed it's somewhere I'd like to be.
A patch of flowers or a comb full of honey either one seems a fine place to be.

Yep, they ARE critical to the polinization of a lot of things...

BGMiller - I'm with you on this one!

I met a bee-keeping nudist once so I guess bees can be docile if you know how to do it. I didn't bother to tell the guy that I had already seen him during a small plane flyover the year before. He was wearing nothing but big black rubber boots and bopping along on a snowmobile in August. The bees apparently didn't mind the noise of the machine.