What does inalienable mean? 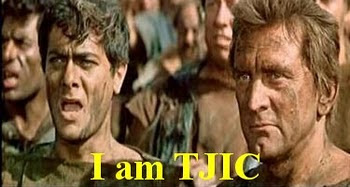 Yes, a busy week, and I am perhaps late to say so, but I believe free speech is not just a right for protected classes like incumbents or the politically correct.

Not two whole months ago I linked a post by TJIC which I found profoundly inspiring. The link in my blog post is now dead because TJIC's blog can no longer be read, having been taken down by authorities who also came to take his guns, although he has committed no crime. Come to find out, TJIC said something on his blog following the Tucson mass murder to which certain officials took great exception.

I'm thinking of all the hate speech that is protected because the targets of hate speech were conservatives or of a traditionally Catholic or Protestant bent. A filmmaker produced a work depicting the assassination of George W. Bush while he was still president and that was soberly regarded as protected intellectual discourse. While we are on that tack, Andres Serrano's photograph Piss-Christ depicted a Crucifix dunked in a glass of the artist's urine-- again, this was regarded as free speech and legitimate creative expression. The artist said this was not meant as a slight on Catholicism but as a statement on the commercialization of their faith, but I contend he packaged it as a product as effectively as any secular dealer of liturgical accessories ever did. Bastard. Again: free speech. He gets to do something virulently offensive to myriad Catholics around the globe and be lauded as original and profound and clever. But don't you dare say anything negative-- however true-- about some backward neanderthal religion practiced by misogynistic goatherds from regions that would never have invented the wheel if someone hadn't rolled one in to them. Don't you dare criticize the anointed of our political body-- they matter and you don't, and I don't, and TJIC doesn't.

I say that is absolute twaddle. I am an American. No matter how anyone may try to twist our perceptions of the intentions of our founding fathers and the penetrating brilliance of the documents they drafted to ensure that our freedoms would endure through the ages, the truth is simple and absolute and always there for the reading.

I have the right to express my views, even if someone disagrees with me. So do you. So does TJIC. Don't like what I say on my blog? Get your own. I will applaud your tenacity and the energy you give to support your beliefs, even if I disagree with you and refuse to link you. We are still Americans.

My fervent hope is that whoever launched this attack on free speech will rethink their stance and recognize that their actions have set us on a slippery slope on which our clutching grasp will find no purchase, and then it's all over but the crying. My hope is that very soon, my link to TJIC's blog is again active.
Posted by phlegmfatale at 1:07 AM

I've read quite a few "I am TJIC" posts in the last couple of weeks, but yours...yours is by far the most awesome. Absolutely spot on.

I hope that the goblins who COFISCATED TJIC's weapons find themselves facing a judicial descendant of Phantly Roy Bean, Jr. for grand theft under color of law. But, since TJIC lives in a police state, it will be a long time coming.