...so on Friday I got to work at 7:00 am and worked until after 7:00 PM, and then I took the "oh, shit!" phone home and Saturday morning is when it went rodeo. The phone rang several times between 6AM and 9:00, and then I was on the phone and computer from 9:30 or so until well after 4:00 pm. I got up to use the terlit a couple times, but after four, it quieted down enough for me to take a shower and finally get out of my pajamas and have some breakfast. Yes, I'll be well paid for that, but I don't feel rested after this weekend. Sunday was more of the same, and I spent several hours dealing with one particular problem child. Tedious, neurotic people can be so enervating, yes? But at least I wasn't at work dealing with that. Being in one's own pajamas makes it all better, I think.

After 5:00 pm Sunday, I started tackling that Close Encounters pile of laundry that's blocked the path through the-- well, I exaggerate slightly, but I've been appalled by my own anti-tidy streak when it comes to clothes since I moved into my house. I started tackling the laundry pile and going through some things and now I have a bag of about $50 of clothes to go back to Target and a bag for Goodwill. Progress! 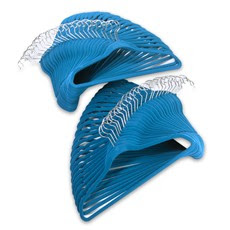 Another thing I'm doing is converting to those ultra-slim flocked hangers. Have you seen them? They pretty much double the amount of clothing you can hang on a rack. Mind, you could smush your clothes up, too, and I'll still keep the nicer clothes on the department store hangers, but for the t shirts and workaday crap, well, it's nice to be able to cram a whole bunch more in a smaller space. Plus they don't seem to jumble up on each other the way other hangers tend to do.

I'm impressed, and I never stopped to think it was possible for a clothing hanger to impress me. Then again, I'm overworked and my life has packed little in the way of recreation for the past couple months.

Oh, big revelation-- I went with Himself to see Jonah Hex when it came out, and I admit I had low expectations, and I actually sort of enjoyed it-- was not nearly as abysmal as I thought it would be, so starved for entertainment + exhaustion = I sort of thought it was a good movie. Last week, talking with Himself I chuckled that someone said what a profoundly bad film that was and I asked him if he agreed and he knitted his brow, dropped a stitch and nodded vigorously as if to say "of course! It was bad, my dear! Are you feeling feverish?" *chuckle* *shrug* I think he's worried. That, or he's questioning his choice of female sidekick.

So, the money shot of the movie is where Megan Fox is told by a paying guest* that he owns her, and a second later (after she's permanently dispatched him) she says "I ain't much for being owned" to which I inwardly squeal with mirth over what should have been the next line: "but you can rent me by the hour."
3 day work week and then it's off to Blogorado. WOOHOO!!! happy dance
*a John by any other name...
Posted by phlegmfatale at 12:01 AM