A Grand Day Out

Saturday I had bidness to attend in Decatur, so it was a lovely excuse to meet my dear friend Holly on the square at Sweetie Pie's Ribeyes. The Decatur Courthouse can be seen for miles and miles, and I found a spot on the square to park right next to Hols' fab convertible in front of one of the local shops.

Sweetie Pie's has chicken fried ribeye steaks. Om nom nom. Their gravy is a lot like my Gramma Bertie's, too, so that's mighty high praise. A large group came in and was seated at the table next to ours and the gentleman next to Holly started a conversation and we proceeded to cut up with him on and off as we ate our lunch. At one point, he said to Holly "I know you can cook, but [looking at me] you, can you cook?" He held his hands up all dainty-like, as if he didn't want to get them dirty. I said "I'm a superb cook. Why would you say that?" And Holly enthused "she is an excellent cook" and he said "well, you just look like you expect someone else to cook for you." I was gobsmacked. I LOVE getting my hands into dough or getting them covered in yummy garlicky smells or just messing around, preparing food. I revel in that. Later on I remarked a bit indignantly to Holly that he should have said such a thing, and Holly took what was obviously great delight in saying "well, you ARE a princess," and then she nearly laughed her head off. 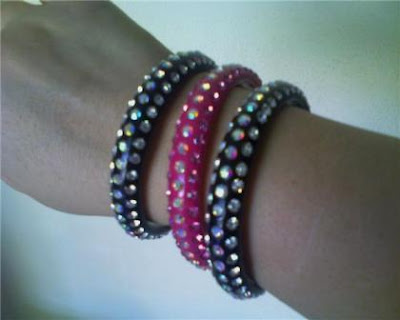 Anyhoo, we went to all the local shops and we saw some lovely bracelets with lots of sparklies on, and I cooed over them a bit, but decided to behave. Then whaddayaknow if Holly didn't turn around a buy a lovely raft of them for me. I was squeeing! She said she'd never seen anyone get so excited over a little thing like that, but I think they're awfully pretty. :) Thanks, Hols! I've worn them every day since. :)

As the afternoon waned, all sorts of classic cars started arriving and backing into the parking spaces around the square. Nearly every small town with a classic courth 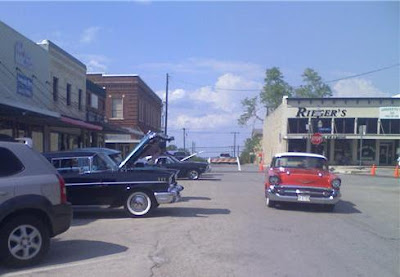 ouse (100+ years old) in Texas will have a classic car rally at some point in the year. They back into the spots and put their hoods up for passersby to admire. There's a festival atmosphere and very often a dance on Saturday evening on such weekends. It's really a quite grand tradition. Since we got there early, the square wasn't coned-off to newer models, so here's Miss LouLou's pert rear end making the only appearance she'll ever make at a classic car rally. The show started about 4pm, and we cleared out about 15 til, relinquishing our spaces to grand beauties from the great American automotive age.

Driving home I watched this rain cone for about an hour before I crossed the wet roadway in its wake. It was massive and breathtaking. I've seen those alot out here. Good stuff. 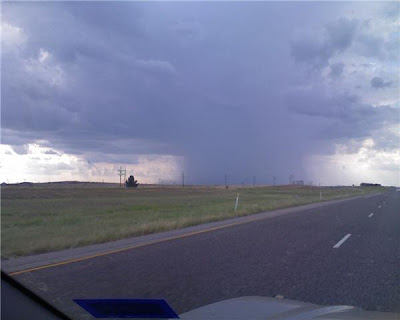 It WAS an outstanding day. Thanks for lunch and laughs, you Princapessa.

Just think: she has yet to see Homecoming in Elsewhere. Don't know if we can survive the squeeing.
Elsewhere PhD.

Elsewhere PhD - Here's to squee-worthy events. Count yourself among my beloved. :)

The good parts of California have that too, like Paso Robles - I see you in a red Buick Roadmaster, but what shoes? Happy Labor-free day!

Glad ya'll enjoyed Sweeties... My lovely bride and I live in Decatur, get to go there regular-like! I love small towns! O'Harlies Catfish on 287 is also worth the stop, as is Casa Torres on 51, just a few blocks from our house... Sheriffs Posse Rodeo is this weekend, ya'll ought to come!
Buddy