Why, why why Delilah? 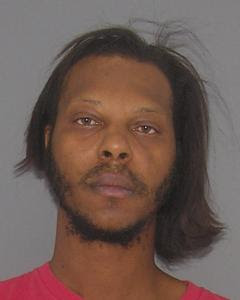 Here's a heartwarming story from back around the time of the holidays. The couple that fights together, goes to jail together. He woke up and noticed some of his hair was missing-- she'd obliged him with a partial haircut. Too bad she didn't finish the job-- the short bit looks better. Then a fight broke out, the po-po showed, and they both were arrested on domestic violence charges. I'm sorta marveling over the look of this guy, though. If you photoshopped hair, eye and skin tone, he could be any color, any race. But he'd always be trashy!
**********************
While I'm thinking of it, RE: the comments on the Putin post a couple days back-- I have to say he looks intense, capable and made of ass-kickery. He's miles sexier than B.O. Putin looks like he hasn't just sent his henchmen out to break kneecaps-- he wrote the SOP for knee-cap bustin'. He seems perhaps too eager to get his kit off, but why not? You know what I'd like to see? I'd like to see a real live celebrity death match between him and Our Dear Leader. Put it on Pay Per View, $1000 bucks a pop, available worldwide. Even split on the take between Russia and the USA. Putin would mop the floor with our guy, and we'd pay off the deficit and get to go back to the polls and start again. I'm calling that a win/win/win.
Posted by phlegmfatale at 7:29 AM

He shaves his chest!

RE: Haircut couple;
He shoulda just shaved the whole thing off & be done with it. Woulda looked much better too.

And you can send THAT to the Red Shed snoops.

Hmmm, you and Fake Steve Jobs both blogged about Putin's shirtless picture this week. Why is it that we never see you both in the same room at the same time? :)

(Scroll down to the bottom of Steve's post, just before the comments start, or search the page for "Brokeback Cossack".)

Any race, color or gender. But definitely always trashy.