Mirror, mirror on the skull...

Coworker had a birthday, and all the cool kids were going. Met in nearby city at a chain eatery for a nosh and I indulged in a couple Modelo Especials. The great thing there was the company-- we yukked it up, and it was good to get a break from the painting and things I've been doing in the house. I also got to see a more relaxed side of co-workers who are generally more strait-laced. This was a lot of fun.

We went to the birthday girl's house and drank pom-tinis, then made for a nearby club. Driving my own car alone, I stopped at a record store to pick up the new Imogen Heap cd. Gas was low so I filled up rather than having to stop later. Then I made for the club where I was to join up with the progressive party.

I generally have remarkably good parking mojo, so on the rare occasions I don't magically get a whizz-bang parking space, I am truly surprised. Well, I pulled into this unfamiliar parking lot, and what do you know if there wasn't a sweet little parking space just for me and right in front of the club door? It was right next to the handi-capable parking spot, but I figured mebbe they wouldn't ding my door. *shrug*

I went in the door and had to pay a $5 cover charge in exchange for a coupon for 2 50 cent domestic beers. Um, okay. I convened with my gang and went over to the bar. I waited my turn and asked the bartender what type beer they had and he looked peeved. Gosh, I'm sorry for asking you to do your job, dude. If you had a menu up or even a blasted row of bottles of the available libations, I wouldn't trouble you. I quickly said *name of domestic beer I won't name here because prolly someone I know and respect likes it and, well, I don't.* and he gave me both my .50 beers at once. I took my beers to the table and said -- no one blunders quite like I do-- "I can't believe I'm drinking this shit" as I sat my two beers on the table amongst the beer bottles of all my friends, all of whom were drinking the same beer I'd just put o 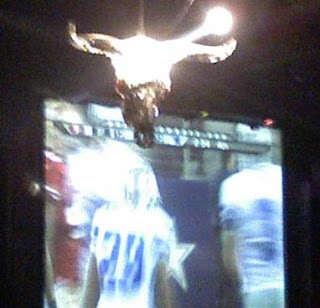 n the table. Fortunately, the only two people who heard me over the blaring music thought it was hilarious, rather than insulting. Gee whiz.

Then I saw it, the mystic mirror cowskull spinning above the dance floor against the backdrop of a cowboys game on the large screen tv. This was well worth the trip and price of admission, bad beer and all. I giggled over it with the other girls, we snapped pics on our cell phones, and I said my goodnight to my friends, leaving my second beer to the custody of someone who wanted it.

I started my car and carefully backed out of my space, again marveling at my good parking fortune this night. That was when I saw the yellow diagonal lines of the no-parking area next to the handicapped parking.

*Whoopsie!* You can dress me up, but you can't take me anywhere.
Posted by phlegmfatale at 12:16 AM

Well, there goes the good karma for a week... :-) That skull IS something else!