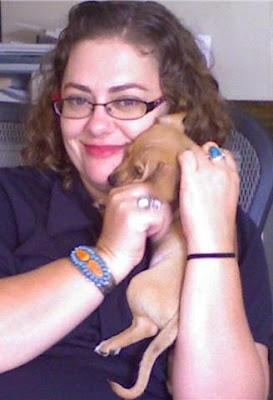 Chuy was such an adorable baby. He's equally adorable now, but he was the most fetching puppy. Then again, the most adorable puppy you've ever seen is always the most recent one you've seen, right? This was almost exactly a year ago. Everyone melted when they saw him - I was even taken aback by how he tugged at my heartstrings. Then again-- I'm his mama.

Yesterday, Tole's dad made the mistake of telling a gathering that he saw someone in town selling rat terrier puppies. One in the crowd who knows me just a skosh riveted his gaze on mine and said "No" in firm, resounding tones. Why did he think I was thinking "ooh, rat terrier puppies. need new puppy. must. Have.....???" *blink* *blink* I was thinking nothing of the kind. Srsly.

Here's Chuy with my baby sis in her office. She's a bosslady now, and she's good at it! Now that I look at this, I realize I gave her all that jewelry she's wearing-- what was I thinking? That opal ring is particularly dazzling. Love the spiny oyster bracelet and then there's that caribbean blue turquoise from Durango Trading. Hey Sis - can I borrow that stuff sometime? :P
Posted by phlegmfatale at 10:02 AM

Adorable! Both of them! And how sensible to resist the lure of yet another puppy. You don't want to be known as the crazy dog lady, after all.