...I've barreled through about a gallon and a half of Kilz2 and an interior paint in the past week and I have a fresh 2 gallon bucket of Kilz2 I've already put a healthy dent in. I've kicked working on the house into high gear. It's still hot as all git-out, but I'm a little more acclimated to it than I was earlier in the spring.

If Holly Golightly were a house, she wouldn't be this one, but this might be her cous 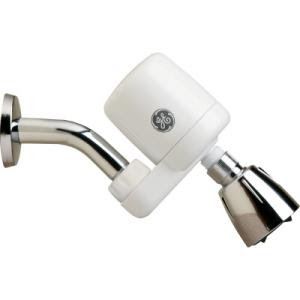 I wanted to tell you about a couple gadgets that are making things nicer at chez phlegm. I noticed not long after moving to Elsewhere that my hair was getting to be more and more of a mess - dull and frizzy. I decided maybe the minerals in the water in Elsewhere were having a negative effect on my Medusa gear. Last weekend I picked up a GE shower water filter at home despot. The difference was instantaneous, and my hair is looking glossier and more its normal self-- wild, but normal for me. There are some negative reviews here on this particular product, but I didn't have massive expectations for $22, and I've seen a difference, so there. I'm just saying if there's a problem with your water, at least it's good to know there's a relatively cheap and simple fix for it. 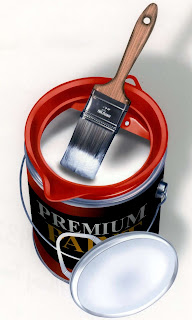 The other thing is these incredible pour spouts by Allway. I've been getting them for a couple bucks each at home despot. You snap it tight on the rim of your 1 gallon paint can, and then you can easily seal and un-seal the lid a la Tupperware. It beats having to mallet the lid on every time if you're going to be tucking into the same can for several days in a row. The little rim for paint brushes has a couple teeny magnets to hold the paint brushes up above the paint. Neato! Plus you can use the same one again and again. It's also much easier to be tidy with the pouring and not slop a lot of the paint product down the side of the can.

Kilz is like Zinnser, right? Hope you're getting plenty of ventilation!
We've been treated to a pre-taset of Autumn, but the Newsies say Summer is coming back for a blast of heat, one we haven't even had yet.

Happy little gadgets they are!!
I could use both actually.. looking forward to pics !

One of the things I miss when living in Ca is English tap water...superb stuff,such a mundane substance that I have never taken the time to appreciate.