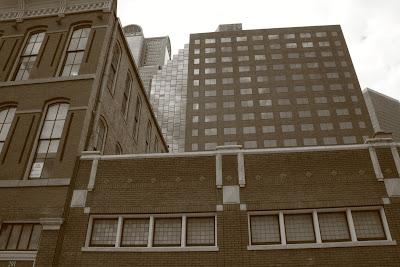 Here's the same photo I took Friday and posted today over at the Diorama. It's not often I get a picture which includes buildings from 6 different decades of the 20th century in one relatively narrow snap. Perhaps I'm using the sepia setting too much, but I really love the depth I'm getting with it. I was heading north on Harwood and snapped this quickly out of the window before the light turned to green, so I didn't really have time to think of lining anything up or worrying about composition. The bottom building on the right with the glass block cubes is where the nightclub Blue is located, and--at least the last time I heard-- this is a pretty swank watering hole.
_______________
My computer is in the game room, and there's a daybed nearby which the doglet naps on as I tap the plastic. Nearly every word I've written on this blog has been accompanied by the rasping intakes of her slumbering breath. (OK, you can call it snoring when we're talking about your dog, but I'll choose to perceive hers as a trifle more refined!)
I just went to the kitchen to put water on for a cup of tea, and she leapt up and accompanied me as she's done countless thousands of times in the last 15 years. Even as her old joints get creaky, she still wants to be there with me, no matter what mundane task I'm about. There's no argument, no reproach, no defiance or battle of wills. Just an abiding little presence that tells me she's there for me and I want to do. If I'm sick, she'll stay in bed with me for days. If I cry, she stays near and frets over me. If I want to walk for miles (ok, she'd rather run), she's up for it.
Funny thing is, I can understand why cat people sniff at the cloying devotion of dogs--cats have an independent streak which is admirable. There's also something to be said for a pet you can leave for a few days and know it won't really notice you were gone. Still, I prefer the sweet will of a dog that bends to its benevolent dictator. Here's to a girl's best friend.
Happy Easter, folks!
Posted by phlegmfatale at 10:05 AM

hey you!
have a great easter! and when you're making egg salad later on, drop a bit on the floor for my tater mans' little burping dog-ghost.
i miss him.
smooch your doggie for me.

first nations - here's to your little burping dog-ghost - long may he wave!

I love the snoring my dog makes, it's not annoying it's actually comforting you know she is nearby and so content and feeling so safe with me.

Give me dog anytime...I'd never have a cat if it was the only pet available.

Ginger and Felix are on the floor by my feet where they usually are when I'm using the magic box. And when I get up to go watch the other magic box, they will tag along. Ginger in my lap or under the end table by my chair and Felix on the sofa by my knee. And when I go get takeout, Mrs. Myron has to let them out to wait patiently on the breezeway.

mushy - yes, it IS comforting to see a beloved pet feeling relaxed and napping! Yeah, I'm for dogs. It's official.

myron - now THAT is what I call a companion!

I love that photo!

And my cat trails me around the houe and always wants to hang out with me as well. She's a very sociable animal.

One thing I'll admit. A dog is a much better companion for a little boy that I'd imagine a cat would be. You want one that will run through the woods with you and get muddy. Be your pal, like Lassie or Old Yeller. I grew up with dogs (pugs), and didn't get a cat of my own till I was grown and in an apartment. Didn't feel good about having a dog since I was away all the time during the day. One stray turned into four in time, with me finding succeeding generations of kittens, feeding them, and getting them fixed. They'd eventually move in, having found a meal ticket. Would love to have a pug now, but 6 cats (two more materialized after I moved into this house) and a few carnivorous fish are enough pets. One of these days, when the cats die off (most are about the same age), I'll get a pug, or a big dog that gets along with the others.

The cats don't snore, but they do curl up underneath the desk and keep me company. I could also walk them, if my neighbors weren't such cat hating assholes. They'd follow me down to the end of the street and back, like a pride of lions. Did that allot before I had to pen them up in the back yard a few years ago. They mostly sleep during the day now, and become active in the evening. When I'm home in the afternoon they come out to greet me and get attention, but when I start typing on this thing they go back to their naps, ether on a bed or in the enclosed back yard (they have a cat door in a back window that allows them to come and go at will). In the evening, when I'm back on this thing after my evening class, it's common to look down and have one or two laying silently beside my chair, or wanting in my lap, and if I get up to lay on the couch and watch TV, one or two will ether get in my lap or lay spread out on the floor below me. My oldest female, named Hissy, likes to lay down in the floor on her back with her belly showing, just outside my reach. She's doing that now as I type this thing. I'll be typing in the evening, with the back door cracked and the door to the garage open, and one will chase another from the back yard, through the garage, and back to the den. It's hilarious to watch. They're like little miniature lion or tiger cubs, playin' out a drama on National Geographic. You guys can't imagine what yer missin', but to each their own.

I've found that most of these questions, "is it one thing or another", really come down to being both. Why limit yourself? When I was away teaching on the ships in the early 90s, mom and dad had a cat and pug that were raised together and played all the time. Nothing funnier. Dad would walk the dog and the cat would follow them all the way around the block, not wanting to be left out. My dad used to say he hated cats, till my sister brought a stray home. He was all hard, talkin' about having to shoot cats in the chicken coop when he was a kid and drowning kittens in a river and all. The next thing you know he's doting over this cat, showing it off to the neighbors as it walks it down the street, and crying his eyes out when it has to be put down a decade or so later. So, don't borrow trouble. Stick with what you have. You'll outlive them all in the end, and it often seems like too much to bear when they go. Having experienced both, I'll tell you that the death of a cat is just as wrenching as the death of a dog. They'll work their way into your heart in no time, so save yourself the pain. Stick with what you have.

barbara - I know a cat CAN be a good companion... Your cat is pretty, too.

fathairybastard - yeah, the fact that a dog is totally up-for-it is a major consideration in the pet-a-lympics. Cats have their place, obviously, but dogs are more companionable, in my view. I'm surprised to learn that cats don't snore, though. You've been adopted by cats, and not vice-versa. I like that you named one Hissy.
Yeah, I agree it's best to not limit oneself. My sister has a huge lab, a young wiener dog, and two cats in their house, and they seem to have struck the balance they prefer with pets, so more power to them. I probably will have a cat someday, waaaaay down the road, but not anytime soon. Maybe if I ever have a place that is more out in the country... :) I'll stick with my bitch as long as I can - I hope I have a lot of years left with her in the account.