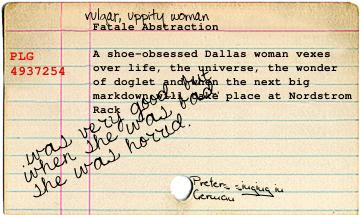 Remember when your library card had a little metal tab with numbers on it, and they'd put it on a little machine and insert the card from your book selection into a little muncher slot, and it would munch off the bottom side edge of the card a bit? I want one of those machines. I've been searching for years on ebay and in junk stores, and I can't even find out what they were called. Do you know what they are called & where I can find one? I don't know what I'll do with it. I just know I want one.

Posted by phlegmfatale at 1:39 PM

I'm far more ancient than you, but I don't know what you're taking about, Phlegmmy, and I'm curious!

It was what they used for keeping track of book-borrowing in the 70s and 80s - the last stage before computers, I suppose. Meh. I prefer the paper-trail style, meself.

I've never heard of this either, but am curious as well. Perhaps that system was only used in your area.

Do keep us posted though. We need to know stuff like this!

I remember it. You need one of those thingamajigs, weird Auntie Ree. A

Yikes---I wonder if it was a regional thing?

I remember them! And I certainly don't consider myself ancient! I'm barely more than a half-century.
They had them at both the Public Library in Killeen and the School Library in Aldine...I think it wnet on my ...gasp...Permanent Record!

No idea. Would a British 'clippie's' machine do? I think they used to bite bits of your bus ticket.

I remember those British bus ticket clippers, weilded by the bus dude who rode the double deckers. But I don't remember the card eating thing. I remember the card stamper, that stamped the card they put in the folder on the inside back cover. Is that what you're talking about.

The Dallas Public Library used those machines in the 50s and 60s. Call the DPL help desk. Someone there may remember that they have such in storage in the library and need to reclaim the space.

You might also check with library supplies company Brodart Co. at www.brodart.com. They might have a lead.

Are you sure it nibbled? I didn't have any luck finding a punch machine but i did find an image of an old-style library card with the metal tag, and I could see it was a number in negative... Seems to me it could have been used to punch your patron number on the circ card or date due slip.

I've got the word out to a couple librarians I know.

Good luck finding one... they were apparently rentals, along the lines of IBM's early systems.