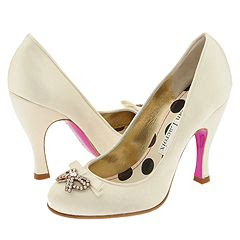 Christian Lacroix has done it again: I feel tingly all over.


I finished reading Dead Man's Walk, and now I'm on to Comanche Moon, the final volume of the Lonesome Dove series. I'm going to be sad when I finish this book. LD was a bit of a slow-starter for me, but then it sort of clicked after about 400 pages and I couldn't get enough of it. I sorta boo-hooed my way through the last two chapters, not wanting it to be over. Yeah, it's THAT good.

I've gone through some drawers and I've filled the garbage trolley more than half-full of old magazines and other crap that should never have tarried on its way to the dustbin. I've decided to be more ruthless about throwing things out. I re-discovered part of my barf-bag collection (Polish Airlines and defunct Sabena, thrills!). I'm proud of myself for actually culling 3 shoe pairs from the herd that has the run of the house, and they will be on their way to Goodwill as of tomorrow. Culling clothes is much easier. I'm also sending lots of books to Goodwill. However, a couple books went straight into the trash--most notably: The Plot Against America, by Philip Roth which no one should read, ever. What a load of crap. Meh. Where was that book when I needed kindling a couple weeks ago?

Did you know the first Hilton hotel happened when Conrad Hilton was traveling in the panhandle and purchased what is the Mobley Hotel in Cisco, 46 miles E of Abilene? Me neither, but what a surprise. Hilton decided he could make a sweet buck letting rooms out to oil field workers, and this was the first in his chain. It's apparently been restored and is now used as a community center for the town. No mention of whether Paris has ever brought her parasite collection to that locale.
Posted by phlegmfatale at 10:46 PM

I think they have a picture with a circle and a line though paris's face at most hotels.

They just got tired of having to fumigate each time she stayed.

I think I've seen that place.

I have a collection of "do not disturb" signs, in various languages, from various hotels around the world.

I love to visit old Texas towns, especially the grocery stores. You can find all kinds of good stuff not even Central Market has, right next to the white bread, mayo and baloney. When I was a kid I knew who Conrad Hilton was--he built a hotel in San Antonio, N. M., as I remember, probably for the same reason he operated in Cisco. And his chain grew and grew. He was real. I think Paris Hilton is really an android with limited programming. Apparently rechargeable batteries, though.

Sooo.... you culled three pairs of shoes and buy one new pair?

Actually, Meg, I don't buy shoes very often. I bought 6 pairs in the past month, but I'm returning 3 pairs. :) Aren't I saintly?