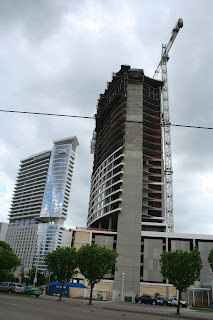 In which our heroine takes wonky photos, bitches about inferior dogs, and channels her inner pimp... 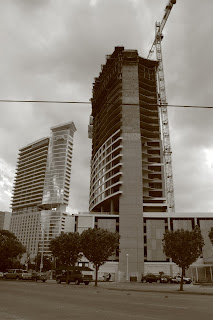 Construction around Victory Station continues apace. Between downtown Dallas and the Coors waterfall sign on the bluff that used to be Baby Doe's is a vast swath of skyscrapers which appear to have sprung up like toadstools after a shower. For one who had been away 10 years, this area of town would be unrecognizable. This is Cirque luxury residences with W hotel in the distance. I think I prefer the sepia setting, but the blue sky reflected on the W is pretty, too. I took these sitting in traffic, and that's why they went wobbly.

Work has been strange lately. I have two residents gossiping to me about each other. They each come and sit in my office and bitch, and I can't say anything. Of course, I think they are lunatics and I don't know why they don't see they are two of a pair and should probably go right out and buy rings. What can you do? One day I'll write a book. Oh wait - that would be Melrose Place, right?

My sister has a golden lab named Barley. Barley is about 150 pounds of pure dog. She was walking Barley yesterday and along came a woman with a pomeranian. Pomeranian lady freaked out, started squealing and let go of her leash, and the insane pomeranian charged Barley. That would be like you or me charging a rhino. Anyway, Barley deftly scooped the pom up on his nose and tossed it up several feet into the air. I'm imagining a killer wh 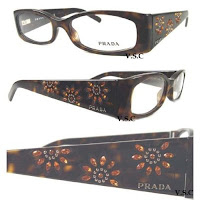 ale flipping a seal: no contest. Pom landed unharmed and yipped off into the sunset with its shrill owner giving chase. Doesn't that suck, though, when people don't get that having the leash on the dog is not enough? Should people with rabid little dogs have to be told that they are supposed to have a human on the other end of the lead, lest the small dog start doing its light-snack-impersonation in the company of a larger dog?
Label whore alert: I got me new dragon-lady specs today. Yes, Prada, darling. Ever so smart and select. Muy fabulosa! Read 'em and peep. Now if I can figure out how Endora did her makeup on Bewitched, I'll be all set.
Posted by phlegmfatale at 10:24 PM

I feel bad for the freaked out woman and wonder what the next time we encounter her walking will be like. As she screamed I now remember yelling as I ran across a busy street "he wont hurt you be still." I guess he looks pretty scary.... good. His head harness will be much tighter from now on. Oh and love the glassed!! A

Color photos are great, but sepia/B&W have their place and this was one of those occasions.

"I think they are lunatics and I don't know why they don't see they are two of a pair and should probably go right out and buy rings."
Okay. I'm using that one, for sure.

And I wish you hadn't explained about the photo! I was going to comment that the building in the background should have tourism potential - the Leaning Tower of Dallas.

I knew it! I just knew it! (me jumping up and down) You are such a quintessential Dallas Woman. That means born with lethal shopping components. As a matter of fact, you may have picked up mine as well, since mine fell out about 20-30 years ago. I've lived in the Metroplex since 1961, when I moved into unairconditioned Virginia Hall on the SMU campus. One job or another, I know my way around just about every city/suburb in the area, or at least parts. Your photos of Dallas are great. I wouldn't live in Dallas with its current problems on a bet, but it DO have its own flavor, don't it?
A friend has a well-trained Pomerainian. His breed tries to be such Ernest Good Dogs. She is quite fastidious herself, and he will bark at us if we slip out of our shoes and leave That Mess right there on the floor. He is truly a sweet dog and greets us like an anxious host--come in, come in. Her daughter got a German Shepherd mix, though, and he became hysterical--full-blown, suicidal Napoleon complex. But he's too small to hurt anybody. Now, I know someone with an undisciplined, untrained 2year old Lab that is as sweet as he can be, but he's injured his owner by tripping him and knocking down two more family members. Depends on the owner, not the dog, doesn't it?

Oh, I could tell you stories about encountering stupid yappy dog owners.

I don't like small dogs all that much, which is why I don't have a small dog. I have a German Shepherd.

What I like even less are the idiots who own these small fru-fru dogs. They are completely clueless about dogs in general, and their dogs in particular. They think that because Fluffy is five pounds and Rex is 60, Fluffy should be allowed to run off leash, bark at people, nip at children, and antagonize larger dogs because it's "cute" and she's "small" so she must be posing no danger to anyone.

People with small dogs hate me, because I will *not* allow my dog to interact with theirs. I step in between and say loudly, "COME GET YOUR DOG. RIGHT NOW. IF HE ATTACKS MY DOG, I'LL BE KICKING HIM ACROSS THE ROAD." And I will. I will not let some yappy little thing run at my *well behaved* dog and start biting. Period.

But it's not my dog's job to get the little ankle-biter away, it's mine. I'm in charge and that means protecting my dog from little menaces.

And I disagree with Night Lightning Woman. No dog is too small to hurt someone. Just ask the police officer who was attacked by a pack of Chihuahuas last year (required him to go to the hospital and have stitches) or the baby killed by the family Pommeranian. Just because they're small does not mean they can't do damage or that they shouldn't be treated as if they can't.

Sister - It was irresponsible for her to let the leash go - she turned her pet from an extension of her upright authoritative person into a yapping bit of prey.

mushy - thanks! you're such an amazing photographer and I value your opinion on the subject.

lj - I'm sure the gazillionaire who owns it wouldn't be pleased to have that reputation!

night lightning woman - Since I wasn't born here, I MUST have inherited it from someone, so you seem as likely a candidate as anyone. Yes, I agree the owner sets the tone for the dogs (mis)behavior. Early days, I didn't control my wee beastie as I should have, and as I matured, I learned that I was directly responsible for her bad behavior. Then began the hard part of training myself to be more disciplined and then she would, too, by extension. But honestly, I've nearly fallen over small dogs more than big ones - they are tiny, get under foot, and it would be so easy to kill one, whereas a big dog is a lot harder to lose track of in the room.

mauser*girl - I agree - it was a tough lesson for me to learn to control my doglet and she had several years of bad behavior before I got trained for my duties. It's true that a small dog can be a danger. Remember the news story about the house full of feral Chihuahuas in California? One of my all-time favorite news bits. Good stuff.

Oh, and I don't blame you a bit - I think when people have an out-of-control pet (or child), the out-of-control parents need the clearest possible instruction that their wee beastie will be made accountable for their forays into the personal space of others. Hence, the airborne canine phenomenon, and so much more impactful when done by the owner.

Phlegmy, those specs are the BOMB! You and Miss Claudia will have to meet at lunch some day, wearing your Pradas. Dian and I will just sit in the corner like red-headed step-children, sniff-sniff.
And I agree whole heartedly with Your Sis and Mauser Girl on the dangers of small yippy dogs with superiority complexes.
Neighbors of ours have a Chihuahua who keeps tunneling under the fence and invading our totally fenced and gated yard. He is a nuisance. Our bigger dogs want to play, but the Chi gets aggressive. We've rescued his nasty bu++ twice and the owner promises to fix the hole...time will tell.
I worry about the fate of the next generation, the manners I see or lack thereof are frightening.

My pom was afraid of cats smaller than him.... But he was probably the most docile of them all. I've seen nasty poms, yes, ma'am.

hollyb - I REMEMBER you talking about Miss Claudia and thinking I've GOT to meet this lady - she MUST be my kindred spirit! I'll look forward to that day. Yes, small dogs can be wonderful, but I hate when they are all attitude and their mouths write the checks their asses can't possibly cash. My doglet? She's a badass-- and incredibly tough little bitch. My kind of gal.
I suspect your neighbors' Chi should disappear.
Yup, they need some schooling on manners.

meg - yup, poms CAN be nasty if their energy is not properly channeled.

"I got me new dragon-lady specs today. Yes, Prada, darling. Ever so smart and select. Muy fabulosa! Read 'em and peep. Now if I can figure out how Endora did her makeup on Bewitched, I'll be all set."

Think retention chain made with pearls or jewels.

matt g - That is a BRILLIANT idea! I'll have to do that! ROWR!

My joy is but to serve.

WOOHOO! I'll choose pearls AND jewels. Rather bitchy, that. It's gonna be so cool!