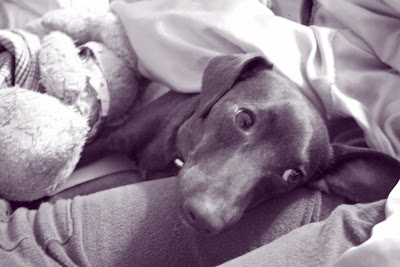 I made some interesting beads Wednesday night. I made more oddities which is always fun. When I'm making pairs, I start feeling in a rut with the glass, like I've never actually done anything interesting with glass and never will again. Sometimes I blow the cobwebs out by putting glass colors together which I expect to be ugly and unappealing, but usually those colors are a happy surprise together, a nicely unexpected dividend.
_____
I keep thinking of that woman in the Duke case. I'm not making excuses for her, and I'm not saying she shouldn't be held accountable. (this brings to mind Al Sharpton and the Tawanna Brawley debacle - which begs the question why Sharpton didn't lose all credibility after that was proven an elaborate fabrication?) What I wonder is what leads a person to the point at which they will let mis-information (ok, LIES) be bandied about to the degree of ruining the lives of other people? I wonder if she felt demeaned by these rich boys who solicited her services as an exotic entertainer? I wonder if as she danced partially clothed and felt dehumanized, felt she had her nose pressed to the glass whilst on the other side rarified air was plentiful and there for the taking for these people born in (seemingly) more privileged circumstances? To the material ease of these young men, perhaps she felt like a cheap, undervalued commodity.
In a strange way, I don't have a problem with the idea of people making a living as exotic dancers, but I've never known an exotic dancer or person who worked in that industry who I felt was having a healthy, well-adjusted experience in life. I do think the tacit promise of a beautiful undressed woman in a room full of dirtbags (whom she would not otherwise give the time of day) makes for an odd sort of tension in which said dirtbags feel entitled to demean the dancer. Of course, not all such patrons are so crass, but I'm saying it creates more an opportunity TO be degraded.
The truth is, just about any woman you ever meet could tell you a story of a man leering lasciviously at her at one time or another, or even making vile comments, even though she was modestly dressed. I'm not saying a stripper is asking for abuse, but I am saying that I believe working in that field makes one less able to defend herself against charges of being a slattern.
What do you think? Am I looking at this in the wrong way? There's also the question of the vengeful D.A. who seemed to have an axe to grind - was she led down a primrose path? It seems she had to be involved in at least getting the ball rolling to begin with, else this whole thing would never have come to light. I think she thought this would be an opportunity to make a fast buck. She should have just gone to McDonald's and spilled some coffee on her crotch. It would have been less embarrassing, at the end of the day.
Posted by phlegmfatale at 12:17 AM

Rita, I'm coming back in a few days to catch up reading; I finally had that dental appointment and have been in a sort of codeine(SP?)-induced mellowness for a couple of days. But I've been thinking about your exhibit - look forward to reading about them.

I needed to update my will, and when I rang to make an appointment today, the receptionist wished me well and hoped my codeine-induced coma would get better soon!!

I think a lot of women in that profession get into the whole Power trip mind set. Being in a position of Power, making men pay to look at you, but not letting do what they really want, to touch you, makes them feel temporarily powerful. OTOH, it leads a lot of them, eventually, to feeling objectified. I know that a lot of them have drug/alcohol problems, too.
It may be that this particular woman had underlying issues, and there is the Racial issue as well. When a politically ambitious D.A. is added into the mix, well then we wind up with a recipe for the tradegy that unfolded on our TeeVee screens.

Well thank you for visiting my blog and for commenting about my bees. I do appreciate it.

I read your post, today, and enjoyed it a lot. I have been married to the same lady for 52 years and I do not judge people on their occupations but I would like to. Men look at women in ways that are probably unkind. I know some women, (I have four daughters and the oldest is over 50) who also look at men in ways that would embarrass me.

Thanks again for your comments and visit to my blog.

meg - I'm glad you're out of the coma! I've missed you, but you know I've been a busy crazy lady myself!!!

holly - whatever it is, it's strange and sad

abraham - You're welcome - your photos are an inspiration.

Of course, you hit at the heart of the matter - humans objectify other humans, and the opposite sexes are another difference to be exploited. People should just be nicer to one another in general. Thanks for coming by!

I agree largely with what Holly wrote, but I wonder if it could just be simple? According to the news as I understand it, fairly soon after this evening occurred, the dancer became pregnant and she went to the police. I wonder if she ever expected anything much to happen-- certainly not the feeding frenzy/firestorm that erupted, fueled by that scumbag DA. A false report to the police might be a misdemeanor in her books--getting Mama pissed because she was with that guy the whole family warned her about might be Real Trouble. Just wondering.

I think she was an opportunist, pure and simple. I think she was trash with no scruples (or brains for that matter). I think she thought the political environment was right for taking these priviledged white boys - who are resented by almost all other human beings regardless of race - and getting some money out of them. I think she thought no one would care because they had money and Nifong let her think it. Even with her being in the sex industry, I think she was given every benefit of the doubt with regards to being a slattern, but she really was.

As Dennis Miller put it, she was the Louvre of DNA.

I don't have a problem with exotic dancing either in its burlesque-y, romanticized form, but it's never like that. I haven't decided whether it's the patrons or strippers who generate the sleaze (probably both), but it is an inextricable part of the whole mess.

Any new pics of your beadwork? Do you have an Etsy store? Love your stuff!

Hell, it may well be that someone at that party did something that pissed her off, and she reported a rape to get them back. Short term thinking that quickly got out of hand. My first info about it came as a hord of "community activists" descended on the DA saying that there had been an atrocity committed and that these white boys were going to get away with it. Sharpton shows up and the MSM, and then the DA is having to jump through hoops to prove he's not racist. Ends up railroading the boys.

On the stripper thing, Jesus, I'm a guy, and guys are basically whores. If we could get paid to go to womens frat parties, strip and have sex with the young ladies, we'd have think about it, for about a millisecond, and then we'd be headin' down to the docks to wait for the fleet to come in. I'm sure she's had a depressive life, probably drugs and abuse, but the idea that in this day and age, a woman has no other choice in life, is rediculous. People have a tendency to build their own walls and limitations, based on what they think is possible, on what they've been raised to think is possible. Maybe she didn't have good role models, or whatever. Shit, maybe she just gets off on the power, like hollyb said. Who knows. A mystery. Why does anyone do what they do?

Personally, I can completely understand the urge towards exhibitionism. I've known that I lean in that direction since I was a kid. Unfortunately, or fortunately, however you see it, I've been foiled in this urge by genetics and a certain fondness for ice-cream and chocolate.
If I was a total hottie (and about 15-20 years younger than I am now), you would see me baring all in any number of magazines and clubs. I know from talking to some young ladies that the money aspect doesn't hurt, either! Of course, drugs and disease are a problem in this milieu.