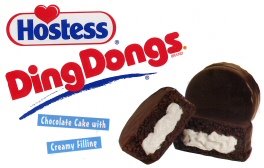 Putting on the ditz.


My much beloved favorite comic - Eddie Izzard - said something brilliant about what the public goes for. Forgive the butchery of this story - I won't presume to quote. He said with the public it's 10% what you say, 20% how you say it, and 70% how you look when you're saying it. He cited the example of JFK in Berlin saying "Ich bin ein Berliner" to a crowd of Germans, who just went nuts with glee. In German, to say I'm a Berliner, he should have said "Ich bin Berliner." Instead, he objectified himself and in effect called himself a donut, the local municipal pastry. Eddie said someone in the crowd said "what did he say?" and the guy next to him said "He said he's a donut. He's an American. He's a fuckin' donut!" as they applauded madly with the rest of the crowd who were caught up in the heady euphoria of being in the presence of the attractive young American president.


Flash forward to American Idol, Tuesday night. Katharine McPhee sang the classic Ella Fitzgerald number "I ain't got nothing but the blues." If you watched her sing with the sound down, you'd think she was doing "Walking on Sunshine," or somesuch. Larking about the stage, fleet of foot and a giddy gleam in the eye, the smile rarely leaving her lips is not a convincing way to convey the blues, frankly, and that is part and parcel of why she is such a dead mackerel on stage - she doesn't connect with what she's singing about, ever! She is locked in stasis looking pretty and saying "look what I can do! *blink*blink*" She's like the baton twirler from the old Funky Winkerbean cartoon. She's pretty much just a beautifully put-together dipshit and boring, boring, boring. Yeah, she's a fucking donut. Tragically, the far superior performer--Elliot Yamin-- went home tonight.


Next week should be interesting, but I'm looking forward to the end of the first and last season of this idiotic show I'll ever watch. ESPECIALLY if the Stepford Singer™ wins it. Sheesh. I expect it all to be utterly resistable in future.
Posted by phlegmfatale at 1:04 AM

Ditto on the doughnut. And what was the rave about "...Over the ...'bow"? I was choking on the powdered sugar dust. Pity about Elliot, however, I expect we'll be hearing more from him than her in the long run. Ugh, and Taylor. I know you like him but geez, he's always Taylor singing somebody else. You know what I mean? I won't be watching next week.

You have to connect when you sing.
I don't 'cos I cant sing and move at the same time. Usually have to have my eyes shut.

What he actually said, translated literally is "I am a Jelly Donut!"

You compare vocal talent, I'd say Elliot get the nod. The problem I've heard from people is that they literally cannot stand to look at him while he sings. I've heard this from both men and women. The guy is talented, but if he's that repulsive to the audience - it is what it is.

I really liked his vocals, and I think he's got bigger singing chops than both Kat and Taylor.

leazwell - I thought her "over the rainbow" was underwhelming. Sucked, in fact. HARDLY the best vocal of the season. She can't sing a melody without noodling around. Cheesy as shit! I agree Elliot will have more of a career than Kat even if she wins. Taylor has great joie de vivre and that makes him very appealing. I do think he has his own style, but it's more obvious in some songs than others.

tickersoid - I love Eddie Izzard too. He's brilliant and hilarious. Maybe you have to have your eyes shut because you're usually singing with the shower water hitting you in the face - I'll bet you're a barrel of laughs on karaoke night!

phoenix - Yeah, it's not a talent competition after all, is it? Elliot was the best in the group, actually. He obviously got some coaching, because some of his distracting physical tics (like bulging his eyes) went away by the middle of the competition. I think camera angle is partly to blame, too. No one wants to see his unfortunate tooth arrangement from the dentist's perspective.

Y'know, this goes a long way to explain how Tom Cruise still gets acting jobs...

Come to think of it, THAT must explain it, Tam! And all this time I thought L Ron Hubbard was making people go see Tom Cruise films!

That blinky winky thing KILLS me!! Stepford? Definitely! lol! McDaddy and his crying self kills me too.

Elliott has blossomed to the almost cute, and will be soon stage. I liked him.

Oh, yeah, McDaddy - my sister keeps saying how much she looks like her father - if that's not a buzzkill, I don't know what would be. Actually, she looks remarkably like Sally Field. You like me! You really like me! Elliot really grew on me, too.

Plegmmy, you are a true wordsmith!
Fantastical!

Kat gets into her upper register and gets screechy to my ears. She's also really tanked some songs, and I wonder how she made it this far, really.

Oh well, such is contrived TV. Didn't you love how everyone got 33% of the vote last night? I call bullshit.


ETA: my word verification is jmumesil. Doesn't that sound like some strange drug?
"Having trouble sleeping? Ask your doctor about Jmumesil. Side effects include speech loss, hair growth in strange places and unstoppable flatulence with discharge."

She will win it and fade away like Ruben Studdard.

Okay, so now I'm so going to have to start calling people I don't care for "donuts." I love it.

I used to get my American Idol fix at the gym.
Subtitled with the sound turned right down. Bliss.

I can NOT believe Elliot went home over the other 2 last week - what an outrage ... I hate this show for making me care about it!

o.g. - I second your call of Bullshit! jmumesil sounds likea cure that is worse than the disease!

fuzzbox - I think you're right and that she probably will win

nongirlfriend - aw, you're welcome. The donut thing was such a great illustration. He's an american - he's a donut!

fuckkit - Maybe it means both sausage and donut? After all there is a Vienna Sausage and a cookie (biscuit) called a Vienna Wafer. Wow - sound off to watch American Idol - that is pure genius!

heatherb - Me neither - I smell a rat

Just about anywhere else in Germany, jelly donuts ARE called Berliner!