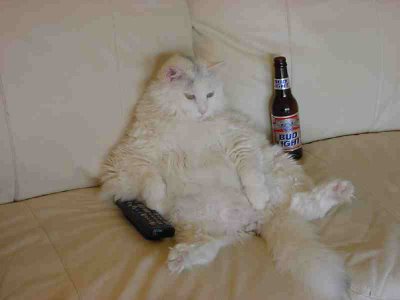 I'm off work the next two days, so this will be me. Just kidding - I'm much better groomed than this. And I don't drink the kind of beer that should have been left in the horse in the first place. I am a remote-control Nazi, though. 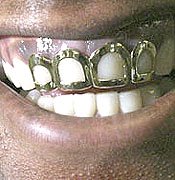 The Smoking Gun reports that the ATF is demanding that crunked-out grills of convicted gangbanger felons be confiscated as federal property, since the oral bling is evidence of ill-gotten gains. The defense said the confiscation of the dental appliances would compromise the dental health of the felons. That's ok, cause when they get in the joint, their new daddy Bluto will probably prefer them toothless and will happily relieve them of they gold package. Classy!

Who should go home - Um, Katherine's first song was abysmal, but her second was fantastic. Chris Daughtry's first was great and the second sucked balls. It's kind of a toss-up who's next on the block, but I predict top two will be Taylor and Chris. Kind of interesting, now, but as ever, thank goodness for DVR and being able to forward through the crap like that revolting host and his incessant flirting with Simon and then there's the insufferable commercials... tv. yuck. but I just cain't quit yew!

Damn, that grill point was funny.

Seacrest doesn't bother me near as much as the drunken Abdul. I predict that Elliot's ears will be Idol history tonite.

I have to agree with who will go home. Chris is a fantastic performer, but his vibrato is really weird. It's out of his throat and it sounds like a sheep.

Taylor is just weird. SNL made fun of him, and to be honest, the real Taylor is more strange than the caricature of him.

Katherine has the look and she's got the pipes.

Elliot is consistently the best pure vocalist, but he looks like a monkey when he sings.

I personally think we should relieve them of their brain tissue along with the grills, but some might think that's a bit harsh.

lightning bug's butt - from a riotously funny guy like you, that's a huge compliment. Thanks!

phoenix - Chris sounded fried when he sang the second number. I LOVE Taylor, even if he is an oddity - in fact, maybe I love him BECAUSE he's an oddity. Katherine looks like Sally Field and really is hot looking, but generally she's very Stepford singer with no real depth behind the veneer. Her second song last night was one of her few genuine-seeming moments of the season. Elliott is a great vocalist, but he needs some serious coaching about some distracting things he does while singing, such as when he sorta bugs his eyes. I really like him, but he doesn't have the charisma. All the same, I think he could have a brilliant recording career.

dick - you imply they HAVE brains, and that's the most generous thing I've ever seen you write! *L* Some people are pussies when it comes to making people take responsibility for the crimes they commit, and THEY would say that's harsh. Me? I'm falling on the side of the fence with you.

I want to get me some teeth like that. I bet I'd be the only one at my Junior League meetings to have them.

Maybe it's just me, but I never understood how that kind of dental work could be thought of as attractive. Just because it costs money doesn't mean it doesn't look like crap.

A blogger thought "...quit..." the hottest line of all time, was going to make it his life verse. I saw the segment "...quit..." and cringed. The most pussified delivery of a line I ever heard.

I think that cat is better than my dogs:) I haven't watched AI since Fantasia, so I have no clue who you're talking about.

june cleaver's revenge - then I'd call you Crunky. I should've seen if they would kit out my retainers with some bling, like diamonds or something. I'd never leave that on the dining table, I promise!

barbara - Did you ever see the mockxploitation film "I'm Gonna Git You Sucka?" A gangsta-rapper dies of an "overgold" which is like an overdose, but where the sheer weight of the gold the person is wearing kills them. And yeah, it looks like shit. It's turning out like Liberace to the nth these days - ugly then, ugly now.

becky - yeah, that cat looks like it doesn't have a bone it its body. I'm a great proponent of hard-core relaxation! I never saw AI until this season, really. You're better off out of it, trust me. 'Cause like I said, I just cain't quit AI. It's a sickness.

Very funny about the gold teeth :)

Thanks for dropping by my blog. I shall definately be back here again.

glad ya liked it! And with a moniker like turboslut, I'll definitely visit your blog again, too.

Oh yuck. They should confiscate those grills just for being so fugly!

The thing I don't get about these "grills"-- in particular the ones with diamonds... wouldn't that be murder on the lips. I would think it would take just one loose diamond to fall out and chip a tooth and slice the lips all to hell.... And I'm guessing people who can afford such expensive dental work can also afford people to fight their fights for them-- but could you imagine getting punched in the mouth with a grill of diamonds... sure the other guy would do murder to his knuckles but at the same time that's going to slice up those lips like the cheese slicer at the local deli.

attila the mom - yeah, they're über-ugly!

perplexio - yeah, it does seem that it would make the wearer more vulnerable. Then again, it is fun to think of the cheese-grater effect if they get a mouthful of fist, or bump into a doorframe or pass out face-first. Then again, I suppose it's like a warning sign and we should thank people who work so hard to annouce the ignorant place they are coming from, removing all doubt, as it were.