On why I love living in truck country™.


A colleague of husband's drives a Dodge Ram pickup with a hemi, and he is so impassioned about his truck that he meets regularly with a group of enthusiasts who all drive the same damned vehicle. Last weekend, they convened at a Go 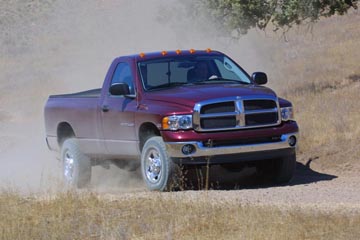 lden Corral (low-budget buffet fare - don't allow yourself to be dragged there) for a meal after which they repaired to the wide-open spaces of a disused parking lot to practice peeling out, burning rubber and no doubt plenty of farting. A security guard came along and told them they had to leave the parking lot or he was going to call the police. Mind you, here are 19 middle aged men (little boys) in their identical Dodge Ram pickups being told to clear out by a security guard on a golf cart. Reprobates!


One guy mentions that for a $25 charity donation they can go to a local race track and do three laps around. This suggestion is met with great enthusiasm, so they all pile into their trucks and start following the guy who made the suggestion, but he clearly doesn't know where they are going and drives too slowly for everyone's taste. Along the highway comes a guy with an identical pickup to one of the group leaders, who happened to be driving near the back of the convoy. He flies by the group, and they all start following him, thinking he'd taken up the reins to lead the way. Suddenly, they are driving in a Fort Worth residential neighborhood and although it's curious, they stay with their leader. At last, the head truck comes to a cul-de-sac, and someone they've never seen before parks on the street, jumps out of his truck and runs into his house. Then, of course, there is the glut of 19 more pickups crammed into the narrow turnaround of this dead end street. Imagine you're driving home and a group of 19 vehicles identical to yours starts following you - how weird is that? No doubt he was whipping out the shotguns as soon as he was through the door.


Now, rams are the animals that slam their heads together over and over for entertainment, right?
Posted by phlegmfatale at 12:42 AM

Brilliant! I loved that story.

OMG...that's so funny. There's a group of guys up here who do that with their freaking Range Rovers. Pussies. snerk.

Oh I just hurt myself! And it's really hard to type when you are doubled over with laughter! What an astounding mental image that was. That will stay with me the entire day and everytime I do something stupid, I'll be able to think "yeah, but at least I didn't...".
I don't even know what a hemi is actually.

Oh god... I almost pissed myself reading this. I was never THAT into anything. I had a 1967 Mustang at one point and was asked to join a local club... No thank you. I preferred not to be involved with a bunch of men trying to relive their youth by one-upping the other men in the group by purchasing the latest, newest thingamajig...

I got out of High School years ago and have nothing to prove to anyone.

We have some of the same issues in my world, but we go find rocks to crawl on top of while we fart.
You're exactly right about the 19 year old boy part.

ROFLMAOXXX - I'm going to tell people that story as if I knew them.

Those guys are so lucky they didn't get shot in the face.

That is just too funny! I wish there would have been photos!

tickersoid - I KNOW - it was too funny not to pass along.

attila the mom - Yeah, it's funny to see pack animals in the city

barbara - I'm glad I could spread a little cheer by deriding a silly overgrown bunch of little boys. A hemi is a type of engine

ranger tom - Glad you enjoyed it. Now, if you have a performance vehicle that actually DOES something, I can understand taking it out with others and putting it through its paces in its natural habitat, like sand dunes or what have you. But a parking lot? Tee hee.

dick - THAT is what I'm talking about - climbing rocks and shit - THAT is the proper way to let your vehicle get its jollies.

zelda - it's priceless, isn't it? Yeah, they are lucky - I'll bet it freaked that guy stone cold the hell out

I was driving to New Mexico once and came across a flock of VW Bugs all headed to Roswell for AlienFest or whatever it's called. 30 or so Beetles, mostly the new ones with the little handle in back (spoiler my ass). Cracked me up.

Oh my word, boys ARE dumb!

I never understood people who purchase a vehicle which, by very definition of its name, means "to avoid" or "to evade"

I've stayed away from Dodge/Chrysler manufactured vehicles my entire life, and I tend to believe my life has been better for it.

liz - a flock of VW bugs - that actually sounds kind of adorable. Yes, it's a handle, isn't it? Funneee.

june cleaver's revenge - yes, that is why God gave us dominion over them in that we can control them with the clever use of boobies

perplexio - funny - I wasn't even thinking of the literal name for Dodge, just the Ram part. I've always been a Chevy woman until GM pissed me off with that employee discount bait&switch routine last year and I started feeling insulted. Got a Hyundai Tucson, and I've been delighted with my new buggy, even though I miss driving a truck, in a way. This is more girlie, and it's been fun.

Nar! Nar!!
Women who drive Ford trucks would never do such a thing......unless its a gaggle of grey haired women in vests and polyester pants. Then you KNOW you're on the right path to the quilt show!

I love the image of those trucks all sandwiched down at the end of this cul-de-sac. You couldn't have written this any better.

Hi miss, all I can say is 'boys and their toys' and knowingly roll my eyes
:-)

Oh this is priceless. Absolutely priceless. My best laugh of the entire day.

Oh, that is the best laugh I've had all day!

becky - thanks for the compliment - it was such a priceless story I had to share it. It's silly and adorable all at the same time.

tricia - glad you liked it - thanks for your comment!

That is too funny!! Talk about a traffic jam!

My husband's friends would jump at the chance to do laps at a track..... Old guys wanting to drive fast, they're everywhere!!

Update. Read this aloud at the office today and if you think libraries are quiet places...
HUGE hit! Great story.

That is freakin' hilarious. This story would make a great commercial.

lj - thanks - I thought it was a golden story, too. And being this close to the source was priceless.

fuzzbox - yeah, it WOULD make a great commercial.