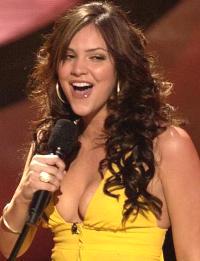 Tune in to American Idol Wednesday night to see McPhee (in the yellow) get her walking papers.

Posted by phlegmfatale at 1:22 AM

So sad. I really think she's got something. But, the BF agrees with you. I didn't get to watch, but he said the men really BA-rought it. Bye bye McFee...we'll miss ya!

ian - in a perfect world, yes. :) It will be fun to see how it all pans out. Maybe she'll marry Tommy Mottola.

ms. m - yeah, the men rocked. It's going to be more interesting than usual this year. I still predict Taylor takes it all, but Elliott was amazing. If those two are the final pair, I'll be amazed that everything turned out the way it should have for a change.

Sorry, but I'd rather get a root canal.

She's a Stepford, no doubt about it.

You know, I thought Elliot was going to go before her, but after his performances last night, I'm not so sure anymore.

I'm afraid I cannot comment on American Idol, but I do have a very crude vocabulary just for Victoria. I met her on a flight from New York and she was every bit as dippy as you'd expect. It didn't help matters that as we left the plane the papparazzi were waiting for her, and as we were right behind her, we were hounded too. From that moment on I knew I could never handle being famous.

I don't know McPhee, but I know Victoria.
Summed her up pretty well I thought.

For the first time I voted for - no, I tried to vote for our homeboy, Elliot, last night. No go. He's a diamond in the rough but he wasn't having any trouble shining through last evening.

I can't believe that Chris got voted off. America truly has some bad taste.

og - top two should definitely be Taylor and Elliott, and if they are, I'll actually believe America got it right for once.

turboslut - golly - she seems like a vacuous dullard hosebag, does Posh. So, was she high? Was she eating up the attention? Did you fantasize about slapping her around a bit? I think I would, if I were on a plane with her.

tickersoid - McPhee is annoying beyond measure - she's a Stepford singer - shallow and not clever at all. Boring. Posh is as dull as dishwater, if you ask me, and I think it's scary that you can read the serial numbers on her breast implants because the skin is stretched so tight across them. Yuck. Not sexy at all. Not posh, either.

leazwell - Yeah, Elliot was fantastic, especially when he sang "Trouble". I thought, hmm, maybe he CAN be evil. Sweet!

fuzzbox - I'm astonished. Apparently they both were, too. I couldn't believe it.

Chris sucked. All he did was yell and do that really weird vibrato think out of his throat. He sounded like a sheep. Surrounded by a live band, he'd be great since in my opinion, he was the BEST performer out of all the finalists. Vocally, he's not much.

McPhee has the chops. I've read what the weekly guests and other vocal experts have said about her after working with her in person. She's got a great voice, and she can move. How many pop stars are even halfway intelligent anyway???

Chris does have a strange vibrato, but I like his voice anyway. I call it a billy goat vibrato.
From a pedagogical standpoint (I'm a trained classical singer) McPhee does have a very good and consistent technique, but she's all technique and no real charm. She's TOO trained - she comes off as an automaton - very robotic and seriously lacking warmth and depth. Good point about the idiocy of pop stars, but she's not at all engaging when she speaks which is a fatal flaw - a charismatic performer is always "on" and not just smiling and looking pretty. Like I said, she bears this unfortunate commonality with Victoria "Posh" Beckham.

I posted about this earlier today.

I called the top 3 way back when.

I love Kat, and I think she's an amazing vocalist.

It will be Taylor and Kat in the end, and Taylor will take it all.

kb - You may be right. I don't dispute that Kat is a very skilled and talented vocalist. I just don't think she shows depth as a performer. I think this is probably one of the more interesting Idol conclusions ever.