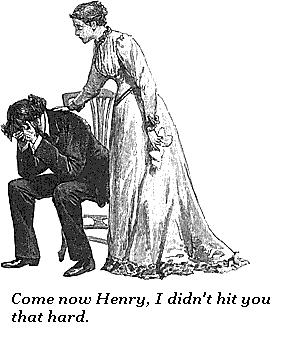 I used to work at the armpit of the Dallas area, the Bulk Mail Center (a postal facility). I worked as a mail processing clerk, and a married woman in my area named Judy was carrying on an affair with a leering weirdo forklift driver. She was always looking over her shoulder and seemed afraid for him to catch her having a conversation with anyone, male or female. He'd pull up suddenly on his forklift, scowling and shooting eye-daggers at anyone who looked his way. He sorta resembled a bulldog, actually, only not so charming. I'd seen him giving her a rather heated lecture on more than one occasion and I suspected he was physically violent toward her.


Now mind you, Judy was so completely stupid that even I wanted to slap her around a bit. Her idea of an edifying conversation was to tell you her grocery list. Bread? Milk? Who gives a shit? Anyway, once Judy told me her dog had puppies in a bureau drawer, but that the wee bastards suffocated because the mother didn't lick off the membrane thingies. I looked at her, deadpan, and said "Judy, why didn't you lick off the puppies?" She sort of sputtered a response that she never thought of that. I rather suspected those dogs had gone to a better place anyway, rather than live in the care of a brain-trust like Judy.


What sort of got me started on this path today was thinking of that song "Let's go to bed" by the Cure, which I always thought must be about talking an argument to death by staying up all night and never getting anywhere with it. If you think you're tired now, just wait until 3. My first boyfriend was one of those power-mad losers that have to win every argument, and apparently love to keep their vict-- er, girlfriend up all night figuring out that he is, in fact, a demigod and not to be questioned.


In Interview magazine sometime in the 80s, Carrie Fisher said in order to work, every marriage has to have a flower and a gardener. She said her marriage to Paul Simon was doomed because they are both flowers and no one was able/willing to nurture the other one. Well, I have to say first boyfriend was the first and last male flower I would ever go within 10 feet of. Even if I come off like John Wayne in a Sherman Tank, I'm the girl, and I make the decorating choices, see? I'll never ask you if my ass looks fat in these. Even if I look like hell warmed over, you'd better tell me how damned cute I am, got it? And none of this keeping me up arguing all night bullshit, because you're doomed to lose anyhow, and momma needs her sleep. I'm going to bed.
Posted by phlegmfatale at 2:06 AM

ah, sleep. That elusive creature. Thankfully I have one of those boyfriends who lets me sleep, at the expense of his rock hard erection. Yup, I'm the flower, he's the gardener, tho there are times when we switch roles. He's pretty laid back and that is definitely a good thing. Oh, and Judy is the scariest idiot I've read about in a while. Maybe some day she'll make it into the Darwin awards.

ms. m - good for you, hon. Yes, we have to set the terms early and give them very clear boundaries. Yeah, Judy seemed too dumb to function. Maybe she needed two men to tell her to keep breathing at all times - one at home and one on the job.

My ex used to run up, shout his piece and then retreat...

It drove me mad. Stand and fight like a man!

What I never understood/still don't understand is women who are attracted to metrosexuals.

I don't know if metrosexuals are "flowers" or if "flowers" are more just the passive beta male types.

OMG- how funny is this, last night I decided this wasn't going to work here, cuz I feel like my house has 2 mothers!
:o

My ex wife was a controlling tw*t.
Death to sociopaths, I say.

Just in case you were missing Judy, that's what I have to buy on the way home from work. Aren't you glad you have such SMRT friends?

And I say, the one with the good taste is in charge of the decorating, usually the girl, in my experience.

blogwhore - he sounds like an emotional terrorist. What a schmuck.

perplexio - indeed, be a man! Sweat, get dirty, and on occasion, stink. Act like a little boy. We like you adorably disheveled. Think Onslow from Keeping Up Appearances. Rowr!

starbender - I love your blog, btw - wow. Kick the trash to the curb, I say!

tickersoid - congrats on her being an "EX" instead of a current, in that case. You're too sweet to put up with that crap!

barbara - you are too funny! Actually, I think the couple should delegate tasks according to the strengths of each. I HATE men who are overly picky about interior decoration - something about that is just wrong.

That's it! There's the explanation. I'm a shitty gardener. Oh, I'm fine with plants alrighty. But they almost never want their egos stroked, don't snore, rarely watch sports, and never, ever have they questioned my choice of paint color. Oh yes, and they never want to sleep on my side of the bed - which is, in fact, the middle.
Hilarious, PF.

lj - *LOL* "That's it! There's the explanation. I'm a shitty gardener." YOU are hilarious, lj. Yes, better yet, flowers are relegated to their own beds, and we can admire them from afar and make the occasional conjugal visit. I'm the same about sleeping, which is simply a state of wild, sprawling tangle, except for nap-style sleep.

Great story ... I hadn't thought of the song that way, but it makes perfect sense. Flower and a gardner is interesting. I hope I've never been a power-mad loser, but I still have things to work on.

Yeah, I was married to a flower and that will be the last one. I think we're all due to take our turns as gardners and flowers or else life will be just a little too boring.

will - yeah - that's what it always sounded like to me. We ALL have stuff to work on. It's the little bullshit dramas I'm talking about. I'm sure you're not a power-mad loser. :)

becky - yes, in truth, some switching of roles is more interesting for everyone, but generally, I insist on being the pretty one in the relationship.