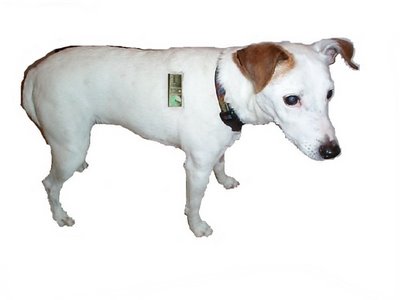 So the doglet had teeth cleaned

almost two weeks ago and while she was out, the vet removed a big cyst thing on her shoulder. Lo and behold, underneath the cyst was uncovered the true source of doglet's seemingly boundless energy: in addition to being her own jet propulsion laboratory, she is the prototype cold-fusion-fired dogdroid. All these years I've suspected that Jack Russell Terriers, with their jaunty yet mathematically-precise gait were too perfect to be a product of nature, and I was right. At the right is a closeup of her control panel. The photo above was taken right after the surgery so she's not quite as bright-eyed as usual, and she's doped to the gills, to say the least. A day later you'd never know she'd been interfered with medically, except for the shaved patch on the back and the vastly improved breath.
I don't normally work on Mondays, but the other girl in the office had appendicitis last week, so I filled in for her. I came home tired and laid on the sofa with doglet, her head draped across my calf and my knee against the soft part of her belly just below her ribcage. Animals never hold their breath, and it's hypnotic how steady in and out their lungs work, very soothing. I fell into a blissful nap, perfectly happy and comfortable.
Since I wasn't going to be able to take her in for her followup until later in the week, I removed her stitches this weekend. Remember me saying she loves to eat toenail clippings? Well, she loves to eat removed stitches, too. Gobbled them right up, and then stared expectantly for more. After the fourth one came out, she glowered at me as if to say "I know you're holding out on me--pony up, bitch!" She can be so demanding and needy. Bossy, too. I wonder where she learned that?
Posted by phlegmfatale at 12:03 AM

hello!i have found your blog by chance, i m el!how old are you?

Guffaw. What charming tastes she has.

I love the description of her breathing...you have a terrific way of finding the little details that make a piece live.

lj - yeah, she's ready, willing, and able to wolf down anything small enough to fit in her gaping maw. Aw, thanks. I had to write about that today. Feeling her little body just living with that special unquestioning innocence pets have was the sweetest gift of the day. She's an inspiring little creature.

Damn, now I want some removed stitches too! And I just ate lunch too.

A dog ate her own stitches out?

Oh my Lord is that dog cute.

I've never had another dog that ate toenail clippings except my Jack Russell. Must be something they program into that control panel if your Jack Russell is doing it too. I haven't tested her on stitches yet.

barbara - Yeah, you can pick your teeth with them and then use them as a bit of extra roughage. Or ruffage.woof.

lightning bug's but - not out - I cut them and pulled them out with my leatherman tool, then she gobbled up the catgut, or whatever you call it.

june cleaver's revenge - Aw thanks, hon. Yeah, it's gotta be something about the JRTs. Mine hears the clippers working and she'll do the snoopy happy dance. Cute and weird, just the way I like my bitches!

such a cute dog!!!! I found ur blog through IT2M

Wow - and you came here anyway? They didn't like my blog, ya know.

OMG, that's hilarious. I have to admit that I must have the most normal dogs b/c they don't eat anything weird. One will kind of gnaw on a slipper but not enough to cause any damage. They are addicted to cheese, though, and come running whenever they hear the plastic wrapper (I've become a sandwich addict).

Yeah, cheese is irresistable to every dog I've ever seen. And the rattle of a wrapper sends her into ecstasies.

My JRT house boundless energy when provoked, like when I come home or mention 'treats' or going 'outside.' Oh, when I grab my purse she ALWAYS thinks she's going with. She is such a sweet little thing, but I've never seen her eat my toenail clippings. Maybe she doesn't know what to do with them! My favorite part about mine is baby pink skin under her fur. She's way too cute!

ms. m - I LOVE when they go turbo. It's hilarious and so sparky. Mine arches her back and bounds around like a little bucking bronco. It's pure joy. Oh, and the pink skin is why I started calling her "doglet" because her little pink belly reminded me of a piglet. Sweet!