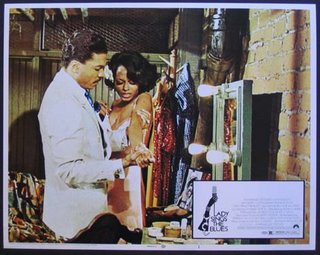 I finally saw Lady Sings the Blues recently, the 1970s flick starring Diana Ross as the tragic singer Billie Holiday. Billy Dee Williams swans in as the brilliantined dandy who sweeps her off her feet and sets up house with her. (What is it about Billy Dee Williams that always makes me think *ting* when he flashes that megawatt smile? ) This is a film I'm pleased to have seen once, but I don't know if I'll ever re-visit. The tragic circumstances and horrors of racism seem too pat and obvious a trope to explain her slide into addiction to smack. Things must have been more complicated than that. Sad story. 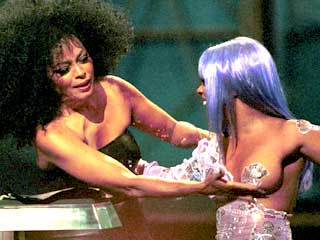 Woot! Diana Ross. There's an onion wants peeling, eh? First there was all the crap with Nancy and Flo, when Diana was pulled to the fore of the Supremes and overshadowed her creative partners. Jilted! I'm sure the spittle of bitterness will never dry between those three. Then there was her bizarre personal interest in the pre-pubescent Michael Jackson. Ease on down the road, would you, but by all means, avoid The Wiz like the plague. Diana was obviously going down the stony end when she was blitzed at some award show at the podium and made free to give Lil Kim's pastied mam a little bounce. Well, shit, she was just doing something half the people in the audience were thinking of doing. BFD, right? Phlegmmy's First Rule of Bad Behavior™: by all means, do not allow people to document your meltdowns - it makes them harder to deny later on. Then there came Diana's arrest for driving under the influence a year or so ago (in Phoenix?). They never actually gave her a field sobriety test, and I think charges were dropped. That's normal, right? The cops wouldn't give her a free ride just because she's a celebrity, would they? Oh, but if they film her arrest story, it could be called "Lady Plays the Blues." Diana may get caught on film copping a feel of nubile pop stars, and she may have enough sadness in her life to justify getting potted and driving recklessly, but at least she's getting away with it. In showbiz, by all means, be a mess - just don't get fat.
Posted by phlegmfatale at 2:09 AM

I'll always remember her skirmish with airport security and anyone in her general vicinity in London. Is she still bonkers ?

I think she was born bonkers.

"Born Bonkers: the Diane Ross" story. Is Hollywood still into biopics? Because that one writes itself. Provided she doesn't get fat, that is.

I am not sure which I liked better: Lady Sings the Blues or Mohogany.

Public meltdowns go with the territory though, and are great for publicity! Any publicity is better than none. But it's all tripe, yanno. None of it is actual NEWS. Its sole purpose is to deflect our attention from other, more pressing issues.

For instance... who really gives a rat's ass if Whitney Houston's teeth are fake?

I remember being 8 years old and seeing her sing Chain Reaction. I was mesmerized. Well, at 8, it really doesn't take much. I can't say I am a big fan now though. I think she is a bit insane.

ben heller - WOW! So great to see you in here - I was just thinking of you this morning, and looking forward to more reviews from you.
Yes, she's still bonkers, apparently, bless her heart. Yeah, she DID go nuts in England last time she was there, didn't she? Maybe English society doesn't play the Emperor's New Clothes as well as we do over here...

barbara - you said it - in the currency of Hollywood, she will continue to captivate so long as she maintains a cadaverously stylish figure i.e., like a bin-liner full of plastic hangers.

nugget - I never saw Mahogany - sounds scary if it's a tossup with LSTB. *L* @ Whitney's fake chompers. Bitch ain't got perfect pitch, neither!

turboslut - well, at 8 tender years of age, you are to be expected to be captivated by some uber-weirdness, darling. She is a bit of a nut, but an entertaining nut, at that.

Every time I see that clip of her feeling up Lil' Kim I break into uncontrollable giggling. It was like she was weighing it or something.

Didn't Michael Jackson then do that "Dirty Diana" song? Was that about her?????? Do I really want to know???

o.g. The feel-copping episode was hilarious. OOH, I dunno - Yeah, I heard smething about the Dirty Diana song. Yuck. No, I think we don't want to think about this any more than we already have.

I agree that the movie is rather trite. But the horror of racism, I figure, is only trite if it doesn't happen to you or Hollywood doesn't want to really alienate the audience by showing more than a hint of it. All in all, her life was very complicated...and a good written biography gives a better feel for the possible "whys." The movie was prettied up and scrubbed of nuance, pretty much.
As to possible explanations for copping a feel in front of the cameras? I'd like to read that book that explains that one because... oh hell. Really, you're completely right. She didn't get fat - so the rest is all entertainment.
Great entry, as usual.

aw, thanks, hon. She IS captivating...