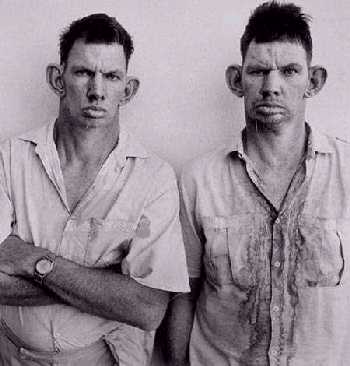 Here's one Tam at View From the Porch should appreciate:

I had a great conversation on the phone with my dad tonight (actually it's always hilarious when we talk). He told me a relative (by marriage, thank goodness) told him about the golden days of adolescent hijinks when life on the farm got a little too boring. He and his brothers picked the lead out of .22 shells, tamped in a tootsie roll over the powder and shot each other with the dentally challenging chocolatey treats. They ended up at a doctor's office having a professional extract a deeply embedded tootsie roll from one of their unfortunate asses. True story from the Ozarks.
So, we kept talking, and the convo turned to movies. Dad asked if I'd seen "Walk the Line" and I said yeah, I saw it on cable. He said he went with mom to see it and she said that was mor

e than she ever really wanted to know about Johnny Cash, and we laughed.
ME: Even though Reese Witherspoon is a bit rat-faced, she's still really cute.
DAD: The one that played June Carter? I guess she is sorta cute.
ME: I have a hard time reconciling her with playing June, who I always thought was rather homely. Did you think June Carter was unattractive?
DAD: Shoot, she looked like a hammered turd.
Nope. No one spins a bon mot* like my pop.
*well-chosen word(s), particularly a witty remark
Posted by phlegmfatale at 12:46 AM

I'll be using 'hammered turd' at the earliest opportunity.

Yup, first - that would be you, tick. I'll have to tell dad he's gone international. Glad you'll be using that term - I'll bet it'll go over like a house on fire! (for those who don't read tickersoid's blog - he set his kitchen on fire while posting on my blog last week - well done!)

Hey! Where did you get the photo of my nieghbors?

We at the Phlegm Propulsion Institute™ have been keeping your neighborhood under very tight surveillance!

And I thought all this time that black, non-descript black van doing survielence was the UN Shadow Government...

that made me laugh out loud, your dad is a hoot!

heather b - Yeah, he's a real cut-up. He comes up with some of the most hilarious things. I'll post more of our conversations in future

hammered turds and chocolate shots in the butt-cheeks - I always learn the most amazing things here!

My brother and I used to pick the lead out of .22 shells, too, to use the gunpowder. That is until he tightened the vise (used to hold the brass) too much, and shot a freakin' hole through Dad's pegboard, through the dryer, and into the concrete basement wall! Could have put an eye out!
Jeff

Hammered turd: I'm writing that one down! Pass along a kudos to your dad, from me.

jeff - I'm sure you're Dad was delighted with the way you customized his pegboard. Also, you could have put out something else more serious than an eye, like your stake in the gene pool, for example.

lightning bug's butt - I thought it was a keeper too. I'll pass it along. One day we'll hear that expression in a movie, and we'll all know it started with my pop. He's a creative genius.

While even at her peak she was no hottie by any stretch of the imagination, I don't think I'd go so far as to refer to her as a "hammered turd."

I think that's a term I'd save for those who are far worse... the one's who fell from the ugly tree and hit every branch on the way down-- I'd save that for someone so ugly "that every shriek of every child at seeing their hideousness will be theirs to cherish. Every babe that weeps at their approach, every woman who cries out, 'Dear God! What is that thing,' will echo in their perfect ears."

That is the special sort of ugliness for which the term "hammered turd" should be saved.

perplexio - Farm boy?
Well, you have to understand what a gorgeous woman my dad married - he's got a very high standard when it comes to feminine beauty.

phlegm: No, not quite. More of a mountain boy. I was raised in a rural area, yes, but not on a farm.

And while I agree with you that June Carter Cash was homely, I think "hammered turd" really is a term that should be reserved for those which are far uglier than she.

This is the second "turd" metaphor I'm keeping. "Hammered turd," "turd in a punchbowl."
You're a goldmine. Yes. Gold. I know the obvious joke here.
Grinning.
And frankly, it was a little more than I wanted to know about Johnny, too - although I have to admit to enjoying the movie and music.

perplexio - the point was not even really about June Carter - it was just silliness and an opportunity to post something like "hammered turd" on my blog. I don't think she was THAT homely, and I don't think my dad did either. Certainly she was a damned sight prettier than she might have been. It's all in fun, hon.

lj - tee hee. I did enjoy the movie, too - I though Joaquin was fantastic, actually, and Reese was charming, which I know June Carter WAS. Actually, I thought their romance seemed a little more squalid than I always imagined. Oh well, nobody's perfect.

If you hammer a turd, surely you get (yecchhh!) paste?

Would you consider changing your template again? This one is rather USA Today

Oh I LOVE the term actually and will use it when/if the opportunity should ever arise and your dad deserves mad props for his bon mot! :-)

arthur q c - I shudder to think what you actually get, other than splattered. EW. You had to go there, didn't you? Here I was, minding my own business and enjoying the preposterous-sounding expression without thinking it through to its logical result. Yeuch.

Change my template??? *sulk* USA Today??? Because USA Today is covered up in rope-slinging buxom cowgirls with big attitude? No, rather, say USA Today ripped ME off, darling.

perplexio - I thank you and my father will be flattered. Glad you got a laugh out of it - there's no end to the cleverness he churns out.

Wow! And here I thought it was a minor miracle that I survived to adulthood. Suddenly my childhood pine cone wars on the church playground seem so tame! :o

Yeah, funny how that turns out, isn't it, tam? I have other similarly distant relatives who fashion aiming devices out of pvc pipe and shoot bottle rockets at each other. These are adults, male and female. Astonishing.

Hahaha! I'm going to have to add that to my repertoire. I honestly didn't know what June looked like until after I saw the movie, and you're right, Reese was a very generous comparison.

yeah, becky - but Reese did do a great job. I've told my dad his "hammered turd" comment has gone nationwide and even international, thanks to tickersoid. Yeah,he's a badass!