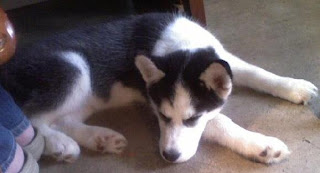 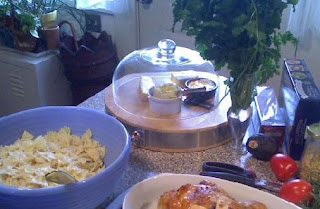 Sunday found me close to home. I called a friend, frequent commenter rabbit, who'd graciously offered to troubleshoot my computer (while I longed simply to shoot it, rabbit had said "we can rebuild it") and he and his wife agreed to come over for a mid-afternoon meal. Then - heigh ho! - a brainwave: Holly and JPG agreed to come over as well.


I navigated yet another blasted marathon to make my way to the market. To my delight, a $21.99 little crock of stinky french cheese (glory!) had been dramatically m 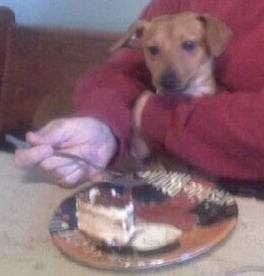 arked-down, so I took the opportunity to try the stuff at a fraction of the usual price. You can see it's in the dark, low ramekin in the photo under the crystal dome right next to Our Lady of the Parsley. I think it's a good sign when a cheese is so roguelike as to require crockery containments. ooze... I also picked up a buttery bleu cheese to compliment the two havartis and manchego I had in the fridge to serve. Yum. I roasted a hen for a pasta dish with toasted pine nuts and sultanas and made a simple salad. This was not the most elaborate meal, but I think it hit the hungry spots. Vast quantities of iced tea were consumed.


rabbit & his lovely wife L brought their fresh pup Panda, a Siberian Husky. She was a little vexed by my little dogs, but she held her own. Panda mostly napped and sat around looking pretty. 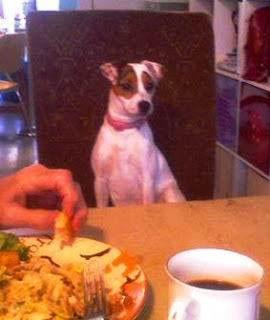 Chuy was well-behaved and refrained from begging until we trotted out the Tiramisu Hols and JPG so graciously brought to the gathering. Then Chuy planted himself on rabbit's lap in a most determined fashion, to no avail. Poor pup.


Praline never tired of begging at table and was limitless in her creativity when it came to finding ways to pop up level with the dining surface. She was largely unsuccessful in her quest, though I suspect a few wayward foody bits found their way into her gullet.

Thanks so much for coming over, Holly, JPG and rabbit & L! I enjoyed your company immensely!

And endless thanks to rabbit for making my computer work better/faster/stronger than before.

Now I'm for a bath with a Lush bomb and a book. Clean house and a functioning computer. Yays!
Posted by phlegmfatale at 8:03 PM

Sounds like a good day was had by all, including the pooches! :-)

Old NFO - It was a grand day, indeed!

Glad you had a fabulous time, Phlegm!

Hope you enjoyed your bath...;)

Christina - Thanks, hon! Wish you could have been here. :) Yeah, the bath was lovely. :)

What a day, the best of company, good cheese and four legged friends.

I did a pub visit with my two female shooty friends today. I enjoy my alone time, but sometimes just hanging out with like minds is so good.

Glad you had that kind of day.

Brigid - it WAS a heart-warming gathering. To top it off, Old NFO AND Christina both called and sent out a howdy to everyone there, and it brought back warm thoughts of the blogger gathering I had Jan 31. *FUN!*

Wish I lived close to you and your shooty friends- we'd be a formidable foursome. Of course, I'd have to wear 8" heels all the time to be eye level with you other three, but I can adjust!