Okay, so it's not the prettiest thing layout-wise, but... 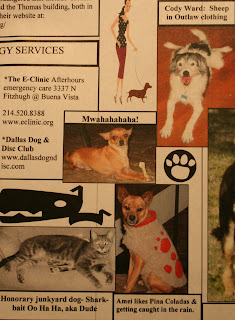 I just came across this, which was not a final copy, but the work in progress which would become an issue of my property newsletter. (I was just learning Publisher, and it's all a bit wonky here, still)


Of all the newsletters I've composed and edited, this dog-centric issue I did a few years ago is officially my favorite. I had residents from all my properties send me their favorite photos of their dogs, and I managed to squeeze every one of them into the issue at one spot or another, often with pithy captions, where appropriate. This was a great way to showcase beloved property pets and acquaint new arrivals to the city with local dog amenities and services. I loved that I had the chance to do the Mwahahahaha caption to one of those (obviously) criminal mastermind chihuahuas, and even managed to endow a cat with honorary junkyard dog status, since that sort of fit his personality.

I hate to admit I've had favorite resident pets, but I have. I can name all my residents, and most of their dogs, as well. It doesn't hurt that up until a couple weeks ago, we had three white dogs named Lola on the property. Anyway, I loved the wiener dogs named Uno and Dos, gifts from their owner's respective first and current husbands. Those dogs would hear my car drive on property and would get all antsy and excited, demanding to be let out. They'd run up the hill to my office and look balefully through the door, hoping the treat lady was feeling benevolent, or sucker-ish, as they probably thought of me. Score! I'd always have treats for the dogs.

I loved the 180 pound Great Dane/Irish Wolfhound mix. The top of his head was almost to my shoulder, but he was such a mild soul. His name was Chaps, and his owner had adopted his GD mother while living in Brussels on business. She then had these two pups, and their beards and brows gave away the provenance of their dear old Dad. By the time he moved back to the states, Chaps was the only one still alive, and he had to be shipped home in a horse crate. Chaps' ears were like big heathered gray blankets. Lovely boy, he.

Once when I was new at the job, a showing was scheduled for the apartment of a woman who was about to move into a larger space on property. I entered the darkened apartment with the prospective renter and I about dropped my transmission when I saw a strange form rising from the sofa. I quickly recovered as the greyhound flopped its head back onto the cushion. The other greyhound conserving his energy over on the loveseat never even opened his eyes. Not good guard dogs, I'm guessing, but someone might at least have warned me!

Then there was Amei, dog on the bottom right, who was just one of the sweetest dog souls ever, I'm convinced. LOVED. HER. She loved me, too. She was one of those little dogs that always looks old, you know? Probably a lot of chihuahua in the mix, but she was a cool, jaunty little thing. She had no idea she was homely, and was ever the social butterfly: there's a lesson in that. Her owners were lovely people, but they were vegetarian, so I tried to make sure to have meaty things on hand in the office. About a year ago, her family moved to Los Angeles and I was very sad to see her go, but very happy to have known her. Her caption was the one I liked best: Amei likes piña coladas and getting caught in the rain. Somehow, that really fit her. I think she would have loved the cheese factor of her caption!
Posted by phlegmfatale at 12:01 AM

That was really nifty---what a great idea!

I'm surprised at the dogs you described! You allow Great Danes on your properties? I suppose it must be because I have been living in California for too long, and this freaky state is very anti-pet. It's almost impossible to find rentals that allow even one cat, let alone a dog -- and only a small one at that. :(

MizMinka - We have no breed or size restriction. I ask for a pet interview for folks with traditionally agressive breeds, but with very few exceptions, all pet owners have been generally responsible about observing leash rules when they are on the property but not in our dog park. Yes, we have our own doggy liberty area that's gate-enclosed with two discrete sections. Touch wood, things have been generally great and we've been rewarded for our open-mindedness with a very neighborly and loving bunch of residents. The idea is to give people the freedom to BE good neighbors and to care for pets, rather than meanly assuming they'll be irresponsible and careless. We have been rewarded again and again for our open-mindedness, and I think that's a great formula for success. Then there's the added benefit that people who don't like dogs will probably stay away.

I looked at the illustration before finishing the narrative (of course)... and was gonna comment on the Amei caption, to wit: excellent!

One of my past dogs was ugleee as sin, but much the same as Amei... the most beautiful, loving pup imaginable where temperament was concerned. We named her FiFi La Bonne to compensate, in part, for her looks.

Good post and funny newsletter! And yes, knowing the dogs in the "neighborhood" helps!

I love how the cat got to be honourary junk-yard dog. How inclusive!