The Palm Centro phone from AT&T is a colossal piece of crap.

Yes, there have been moments I really really liked this phone. Like, the first, oh, couple months I had it. The first time.

I'd put a Palm Treo through a rough 2.5 years before it crapped out utterly, one day last spring. I wasn't delighted the phone gave up the ghost, but it was a complicated machine and I had put it through its paces. I supposed it deserved a rest.

I grabbed my bonnet and sashayed out to an AT&T store and selected for my fab new phone the Palm Centro. Smart choice, right? It's a lot like the Treo, but smaller, cuter and with nice g 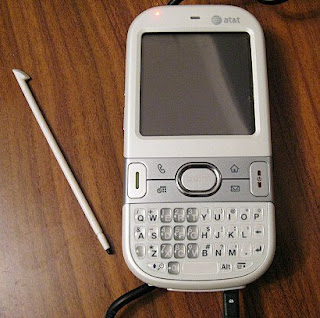 rippy QWERTY keyboard. Sweet. The first week I had that phone, I dropped it and put a rather smart little *ding* on the corner of the phone, but it kept working. Seemed fine.

To make a boring story short, the first Centro crapped out shy of the 3 month mark. That ding on the corner never seemed to affect the efficacy of said phone. AT&T warranty folk felt otherwise. They'd already replaced the phone but they said the warranty was void because of the mark on the case, so they charged me a brand new $349 for the new centro on my phone bill. NOW, I'm shy of the year mark for when I got the first Centro, and the second one-- the $349 one, TYVM, crapped out Wednesday night.

Yes, I'm back on a $20 go-phone from Target. ARGH! Seriously aggravating.

I will miss my internet access and my 12 flavors of solitaire, but I won't miss dreading the day my über-expensive phone will utterly crap out. I'm calling AT&T first thing in the morning to cancel my internet service on the phone, and that'll save me about $40 a month right there. I won't miss shelling out the extra $40, either.

ARGH!
Posted by phlegmfatale at 12:01 AM

Last year I gave up my expensive flip-phone from Verizon... The one that would do everingthing in cluding (nevermind) and got a $30 prepaid phone from Wally-World.

Internet access from your mobile is one of the great 21st century scams - very few people really need it.

But it is a great money spinner for the mobile operators and the phone providers - your experiences show just how flakey the hardware can be.

Being the closet Luddite I am, my phone is a cheap Samsung that's made and received phone calls for about three years now... flawlessly. It will die... some day... and will be replaced with yet another cheap but functional device. There's a certain joy in being a minimalist. ;-)

OTOH... My kids make fun of me coz I don't text, but Hey! Whatever floats their boat. I gotta leave 'em a few openings.

I've had a few different types of phones. After the years of good and bad, I've found it's a gamble to buy any phone that is a new design. Even the reputable manufacturers have lemons, which they discontinue almost immediately after repeated returns for defects.

Always avoid the big stores with technicians. They are blowing smoke, since it's damn near impossible for anyone to be a certified technician for all the different phones. They are only changing batteries, looking for damage and trying to find a way to avoid honoring a warranty.

Considering the price for high end phones, for what you pay, you can buy a cheapo cell phone, a laptop and an air card for internet access.

SWMBO seems to like her Blackberry Storm, but I understand she's in the minority.

I dislike hearing it receive her forwarded email at 0400.

As for myself, I finally was coerced into upgrading to a RAZR last year. I dislike phones, for the most part.

I got a $20 pay-as-you go T-Mobile samsung-thing from Costco that's worked for 2-years so far. My wife's identical one that she never hardly uses however just took a dump.
I'm goign to have to find new ones and pop the SIMMs into 'em. Maybe one with a POS camera.

Thanks for the review-I've been looking at new phones...I'll go ahead and scratch that one. What a pain in the a$$ for you. Ugh.

Back in the days when my kids had their cell phones through Cingular both the coverage and the customer service sucked canal water. The phones were pretty, but fragile.

Nice to see that under AT&T, nothing has changed.

I had a Blackberry from work that had internet service. The only thing it was really good for was getting my email and tracking Red Sox scores when I wasn't able to watch.

PALM's opinion about your data is curious. They believe it's normal for their technology to utterly lock up and destroy all your information at least once a month.

At least, thats what they tell us when we asked through the school. 'Normal' service from them....total loss. Ok, I can understand that. They know their stuff is crap too.