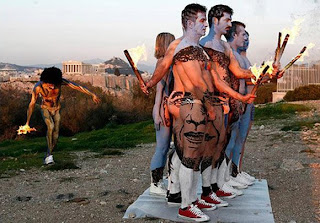 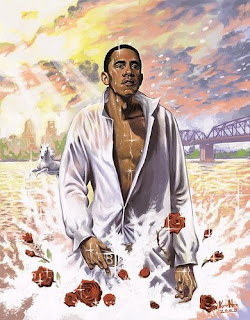 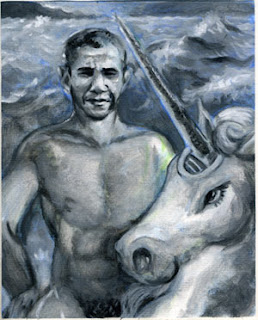 Lots of unicorns and rainbows. Some nudity. Much hideousness. 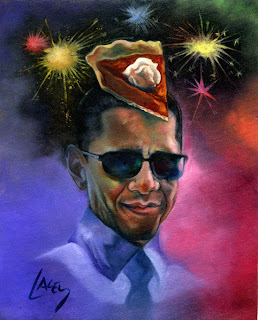 *shudder*
There is one bright ray of sunshine, though: a Michelle Obama pancake art with pink dolphin which you can buy now on ebay. Love it!
Posted by phlegmfatale at 12:01 AM

You didn't find one of him walking on water or fixing the economy with pixie dust & angel farts?

Oh, good lord! Is that last painting titled "President Punkinhead?" That thing with the unicorn was by a teenage girl in art class, right?

Obama naked with a Unicorn. Is that symbolic for someone about to get reamed? Who's the pitcher and who's the catcher in that painting? Ouchy.

What's up with the pie? Because we're all supposed to share ours?

I'm just glad the Administration gave Gordon Brown some DVD's instead of these paintings, but I'm afraid it's only because the idea hadn't (yet) crossed their minds.

I passed, thankyaverymuch. I see more of The One than I wanna see, as it is. He's every-frickin'-where I go, on my teevee, on tee shirts, bumper stickers, ad nauseum. Enough, already. I mean it.

not playing on this one... I really don't need anymore bad images of the Lightbringer in my head...

The banana-belt is just peachy.

Even worse than velvet Elvis paintings...

Horrible, yes, but until you have one painted on black velvet the nadir has not been reached.