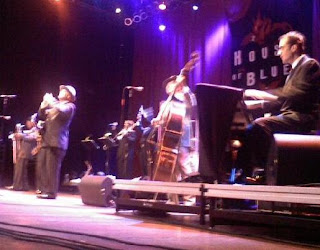 So much I could say here, but I'll save that for later. Met my gf Tracy out at the show. Was fab. Will write more later.

I'm dismayed that Chuy is scheduled to have his prognosticles unincorporated Friday morning. I've been told by many that he'll be more sociable de-balled, and yes, I know it's necessary, but he's such a perfect little dog that it pains me to alter him in any way. His back bow-legs just look so right with the swinging dick-taters. It's a shame to unman him so.

CHU MAN FU UPDATE: Dr. May just called me and said the new streamlined model Chuy has come through in flying colors and is well on the mend. Truly I worry about the meter of his gait now that he's bereft of two of his centers of gravity, but, them's the breaks, eh?
Posted by phlegmfatale at 12:24 AM

They can install fake nuts...

I was just going to suggest the same thing!

HOB is a good place to see decent name bands. Having the beer brought to the table is nice too.

Peter - too late! *gnashing of teeth*

Hammer - Yeah, it's a great venue with no bad seats, imho

Just think how quickly he will be able to run now that he is more streamlined.

I've seen BBVD a few times, and they always put on a good show.
Glad you enjoyed their performance.

I am soooooo feeling green about this and not because of the recent Irish activities! Hope you had a blast!

Give Chu-man-fu a pet from Auntie Holly. I hope he doesn't miss them too much. Although Tipper Sharpton didn't seemto miss his at all.

Glad to hear that Chuy is doing well. Neuticles were invented for the dog show set. It's a disqualification for a dog to be a monorchid (sp). Of course I know of one person who got disqualified because their dog had three (one dropped after they'd had the neuticle put in.....

Hahah -- love the "dick taters." I had Reese and Kona's removed just before moving here. Kona was the same, but Reese stopped having to mark areas where other males had peed (even if it was inside someone else's house).