I probably shouldn't admit this, but I actually was the first responder to a poll online, to my utter shock. I was looking up roadkill, because sometimes I'll see a dead fox on the road and I was looking up stuff you could do to salvage the fur and whatnot and a whole bunch of links came up, and there was this poll, see?
Anyway, I didn't really give it a lot of thought or I would have realized that I HAVE eaten venison harvested by dad's Mercury some thirty-some years ago. Anyway. If something's freshly dead and not ruined and is perfectly good meat you would have eaten anyhow, why not eat it, right? I admit I drooled a bit at the sight of the glorious backstrap harvested from the buck that killed AD's radiator, that time, so why not, right?
Anyway, here it is: 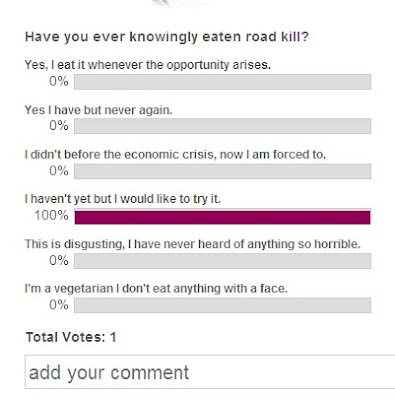 I'm not proud, but there you have it. A dubious distinction, at best. Guess how I answered??? :P

So I was talking to my friend Lin. I told her about seeing the fox on the road and how it's a shame the fur will go to waste and that I wondered about curing the hide. She said she came across a freshly dead skunk for a relative once, and she called up a leather worker she knew who specialized in chaps and gear for motorcyclists and she asked him about how to, er, harvest the hide without disrupting the unholy stink that lay within. The friend, a Frenchman, said "yoo 'ave to cot arrround zee asshoule."
I said "those are words to live by." Seriously. Asshole in your path? Cut around the asshole. Skinning out a dead, musky varmint? Cut around the asshole. Rinse, lather, repeat.
Posted by phlegmfatale at 12:01 AM

I have several friends from Wisconsin, and when they first told me that the sheriff could write you a tag so you could get a road-killed deer properly I was a little skeeved out...but, like you said, if it's not instant hamburger with chrome from the bumper mixed in, why let it go to waste?

Got a cousin that's a lawyer (hangs head in shame) and tinkered with taxidermy as a hobby. (yeah....I hear Jeff Foxworthy's voice too)

Anyhoo......
He's on his way into town one fine morning when he sees a skunk get into an argument with a sedan with predictable results. With out a second thought he pulled over, whipped out a Hefty bag, and collected the recently deceased for his next project.

In court a couple of hours later he got a real chewing out by the judge and threatened with contempt because of the smell.

The project skunk never went much farther. Apparently his wife was even more irate than the judge. She was also in position to hand down stiffer penalties.

Years ago, I worked on a construction job in a rural area near a small group of houses that were inhabited by a family that, obviously, didn't work and lived off public assistance and what they could find.

Every morning, the "gatherer's" left on their bicycles to a local store for their 44 oz malt liquors and road kill. They returned, fired up the pit and started their typical day of drinking, cussing and eating barbeque road kill.

I'm thinking salvaging road kill hide depends on how long it's been dead. If fresh, the hide should still be usable. It would have no commercial value, though.

I have never been able to tell the difference between road kill and harvested deer. It is all venison.

Thanks for this! I am adding "you have to cut around the asshole" to my list of rules for life.

During my university days there was a professor in Natural Resources who regularly scooped up and ate roadkill. Roadkill Jill she was called. I was never invited over to her house for dinner, sadly.

Off-road racing humorist and bon-vivant Jerry Bernardo was telling us a story about how he was on a ride with friends, and way-out ahead of them he came across a just-dead cat in the dirt road that was in semi-rigor, and so he got down and bent it back upright using the tail as a tripod, with its paws up in the air going "Rowr!" and it scared the crap out of his buddies when they came around the corner and saw it. Har! My one roadkill story.

I was offered a tag on a doe I bagged with my car. Trouble was it was 95 degrees out and I would have had to drive home (50 miles), change clothes and get my gear, and come back for the hide et cetera. It wasn't worth it for meat that was probably already marginal. Ditto the hide (and ticks were baaaadd that year).
LittleRed1

I ate 'bumper bear' once.

The day before Thanksgiving, an upper middle class cousin of mine ran his car into a turkey that wasn't fast enough.

The impact did not kill Mr. Turkey. Said cousin came back, finished the job, and had my grandfather prepare it for Thanksgiving.

I heard it was delicious.