Down the cinematic rabbit hole 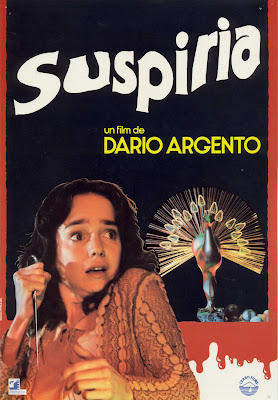 I had a Netflix account for about 5 minutes, once, but I really don't have a lot of time to watch movies, so I deactivated it for more than a year. Recently, I wanted to watch something and found it was available streaming on Netflix, so I reactivated the account and watched, happily. I thought how convenient and nice it is to be able to call up any of thousands of films to watch instantly, though my tastes generally run to those of foreign/arthouse extraction which must be ordered on DVD.

Still feeling sicky and not up to much physical activity, I decided a quiet Friday evening mit puppehs on sofa watching film was in order. I didn't watch Netflix, but a DVD has been languishing unwatched for a while that I must have picked up in a bargain bin somewhere. Touted to be Dario Argento's masterpiece, I knew Suspiria would be memorable, if nothing else.

In this film, a plucky young American arrives at a ballet Academy in Europe and quickly surmises thangs ain't right-- the academy is staffed by a coven of witches! The coven has enjoyed 100+ years of functioning on the down-low, and they would have gotten away with it, too, except for that meddlesome Suzy, à la Scooby Doo.

Here I must to throw out a disclaimer about my tastes in film. The films I cite as favorites are generally not the Hollywood favorites where the guy gets the girl and the monster is killed and the human race is saved from menaces of alien/foreign/subterranean extraction. What generally will make me a sucker for a film is if the costumes and textiles in the film are period-correct and of a sufficiently fine quality that when-- coupled with good set design, makeup and lighting-- I feel like I'm peering into a postcard from another time and/or place. Films that win high marks with me on this score are "Sense and Sensibility" and "Henry and June." S&S did have a happy ending, but H&J was a bit of a drip-fest, in truth. Still, the sumptuous circa 1931 costumes(oh! the shoes!) coupled with top-notch casting redeemed the whole thing. Throw in Fred Ward and Uma Thurman along with that Portuguese cupcake who made blueberry pancakes sound erotic in Pulp Fiction*, and I'm all over that! The cherry on the sundae is the sublime Richard E. Grant, for once playing an earnest rather than comic turn. He was the one truly sympathetic character in the film, and one's heart broke for him. It was a downer, but visually riveting. The acting was superb, as well, so, worth seeing once, if you can stomach that variety of drama.


Stylistically, there is a lot to love about Suspiria. There were quite a few design elements which highlighted the 1970s fondness for art-deco and art-nouveau flourishes and there is no doubt about which decade birthed the film. One early scene in the film finds our heroine in Olga's apartment in which the walls are fairly crawling with intricate black-and-white wallpaper. I expected the wallpaper to come alive and swallow the room and all its occupants, but alas! Twas not to be. The hair, costumes and makeup were redolent of the better of 70s style, so high marks on that score, Dario!

Speaking of Olga-- what happened to her? At first Suzy was rooming with her at her apartment and then the dance maven arranged for Suzy to move into the dorm setting and Olga pretty much dropped out of sight. Barbara Magnolfi was actually very interesting as Olga, and I was sorry there was not more development of her character. She's a good actress and would have been fun to watch teamed up with Suzy, poking about hallways and kicking some coven ass. But I digress.

The music was appropriately menacing and much better than average for this film. The film was not overly reliant on the cheap-shot of sudden shocking noise events that make you jump in your seat, a quality for which I was most grateful. I have to say again the soundtrack was quite well-scored and was the most elegantly rendered aspect of the film.

There are allusions to attractions and sweet interactions between the ingenue and other characters, but very little of that is developed in the film. There is definite tension between Suzy and a young man, and other characters comment upon same, but she and the young dancer never share a moment-- a bit unlikely, considering the murky stew of hormones, narcissism and needy insecurities for which such creative environments are well-known. Even Suzy's sweet politeness to the house Frankengoon** never pays off to stay his cruel hand later in the film and that's just mean, isn't it? I wish a little more had been made of these interactions and slightly less yards of film spent lingering on design details of the set.

Pas de goo. Oh, and dancing? There were a couple of fleeting dance studio scenes in the film, but very little that tells what a demanding practice regime such academies institute. The dancing seems merely a brief side-detail, and I think a lot more could have been made of that aspect. Anorexic, mind-clouded with over-exertion, ballet dancer dreams up a house of horrors at the institution where she is imprisoned, ever the slave to her art? That's just me. Don't listen.

And the scene of the chick wallowing about, screaming in the miles of un-spooled coils of wire-- was that supposed to be razor wire? If so, why wasn't she cut to ribbons? If it wasn't razor wire, why didn't she just get up and climb out of it? Clearly, she was mentally unwell.

I think if you are a horror film fan and/or 70s cinema in general, you should definitely watch Suspiria at least once. As for the gore-level, there were a few truly grisly scenes, but I also saw the film described as having one of the most gruesome murder scenes in all of film and I have to say that whoever said that had clearly not seen Hostel***. I think this film is a bit of a missing link between the churning, burning suspense and angst of the (beloved!) Hammer Films era to that of the modern horror fest.

Now the rabbithole: off on link-chasing from details online of Suspiria, I popped into Netflix and watched more 70s cinema of which I'd never heard. One of them was so bad I won't even name it, but I finally gave up in disgust. Yes, it is possible to exasperate even me to that degree.

Lesson learned: some film is relegated to the vault of the forgotten because it is forgettable, but Suspiria is definitely worth a look.

*Maria de Medeiros
**can't remember his name?
***WHICH I would strongly urge against seeing
Posted by phlegmfatale at 11:02 AM

Should have occurred to me last night, but you want to find Haunted, with Aidan Quinn. It should scratch your lust for pretty period pieces and it's a really damn good horror movie.

Likewise Session 9. Not a period piece but very visually striking; arguably the setting is the real star of the film. They managed to get an actual real-life abandoned insane asylum to film in.

Brides of Satan, filmed in the Philippines. Tom Selleck's first screen debut. Together with a truly spectacular Ferrari!