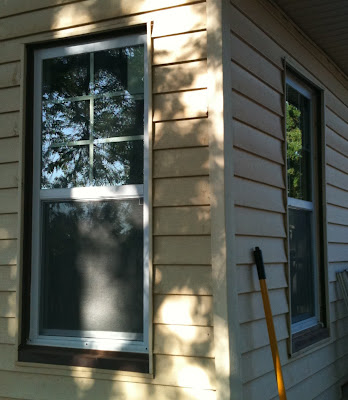 I promise I'm not TRYING to find the turd in the punchbowl. It's just sort of there.

There's something major wrong with each of these two windows. The one with muntins in the bottom sash is an easy fix. They've already ordered a plain sash and the nice window guy will just pop by in a couple weeks and switch that out when it comes in.

I decided I wanted the colonial style muntins in the upper panes because it's sort of cute. Being as someone ground all personality out of the house with cheap vinyl siding and no framing around the windows, I thought the little old lady could use the extra oomph of a bit of feature in the windows themselves. Think of it as mascara.

The other problem is so enormous that the entire window will have to be replaced, alas.
Can you see it? Something in me wants to shrug this off and say it's not a big deal, but what if an OCD person wants to buy my house someday, and that one wonky window is the deal-breaker? I think I'll be swinging by Home Depot tomorrow with my photos, alas. :(

All that aside, the house is SO much cooler already. The window over the sink had a big gap at the corner that was a housefly super-highway. (bless Praline's little fly-eating heart!) I bought these on the 1 year no interest store credit card, but I'm going to pay this round off with all my overtime earnings, and I'm hoping to get the remainder of the house windows done in about 2 months. Thank goodness for overtime in the summer. I will be seriously eyeballing each window before it goes in, though. Fo sho.
Overall, I'm very happy, but these little hiccups are a little disheartening. I suppose this is to be expected, a bit, perhaps?
Posted by phlegmfatale at 12:01 AM

I guess I'm missing it, but then again, I have no earthly idea what a muntin is, either.

What's wrong with the one window?

The top section is divided into 6 panes. On the first window, they put 3 on left and 3 on right, dividing them vertically. The second has 3 on top and 3 on bottom, divided horizontally.

Little hiccups are the norm when working on a house as old as yours. They are what make it a challenge. Just think how boring this would be if everything went dead-bang right the first time. :)

In all seriousness, if that is the worst you come across in this process, call it a major win!

thou I live in the northeast and it's rare to see double hung windows without muntins.

can't they just pop out the top sash and replace it with one that has the proper orientation?

was it installed wrong or did the idiots making it think that's how muntins go?

Is there a significant difference in width?

Does make one window look like it was put in sideways. :)

Oh jeeze. My OCD kicked in hard enough to start the KTM. It's enough that I would cut and frame-out a larger window-hole if necessary to make them match.
But good windows are a godsend, as is a tight roof.

Meh... you KNOW there is nothing square in these old houses :-) And yeah I can just hear your OCD alarm go off as soon as you saw that window :-)

Oh dear! Yes, I'd have to get them to fix that. Made my OCD hurt

Detail is not my strength-nor home repairs. I watch your blogs on these with utter fascination.
Muntin, huh? I've learned a new word.
And it's GOOD to learn new things when you can't drive for a few more weeks!

Worse the stool cap, or the board that makes up the bottom of the window is far too short. It needs to extend out past the siding by at least an inch and there should be z flashing above the window. J track is not flashing.