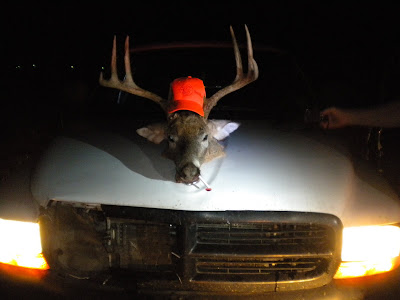 If, driving between venues in Broad Ripple blogmeets you should happen to run over a local, you will have a mangled bicycle in your grille and a lot of paperwork with the local authorities and bad feeling with the local hippies.

After hitting a local resident between venues at Blogorado, we have backstrap.

[addendum - This was not intended as a slight to Broad Ripple, which is a gathering I would dearly love to attend my ownself, but merely to portray the goes-to-11 degree of ossumness that was Blogorado. I have to say that Blogorado totally PWNS the two gunblogger gatherings, I hosted, as well. Farmfamily is uniquely positioned and resourceful to put together an event which few could hope to parallel in any degree. They really hit it out of the park. More on that, soon.
Posted by phlegmfatale at 9:08 PM

Pre-tenderized. I ain't too proud to eat fresh roadkill.

The Dodge truck doesn't appear any worse for wear, though.

Ohhh, I can just hear some comments comin'.

As an aside, a local woman hit a deer late last week on the way home from work. Her truck still ran so she continued towards home and hit another deer a few minutes later.

Hi Phlegmfatale, it was great to meet you! I had a blast.

Is that a cigarette in his nostril?

A contractor I was overseeing hit a deer near Claude a couple of Sundays ago, his Chevy did not do much better then deer but he limped into Amarillo.

Not the nostril Robert, in the mouth :-) You should have seen the Deputy's expression when he saw it :-)