I have the loveliest, nicest bunch of friends. Truly I do.
About a year or so ago, FarmDad and FarmMom started talking about the posts on the front porch. One had a big split at the back and you could see inside that there was not actually any support inside what should have only been decorative panels around a post or brace of some sort. The middle of the porch overhang sagged at the front, too. This was not good. FarmDad said "we can fix that for ya." He went on to say they'd come down early before the next party and just whip that out.   I appreciated the enthusiasm, and I was in no doubt of his carpentry skills, but it was difficult to imagine someone putting that much effort into a daunting project like re-doing the posts on an Arts & Crafts bungalow.  I'd sort of pushed it back in my mind, but with Phlegmfest approaching, FarmDad and FarmMom kept bringing it up, so I sort of figured they were serious.  They confirmed they were going to be in town early to get this done. 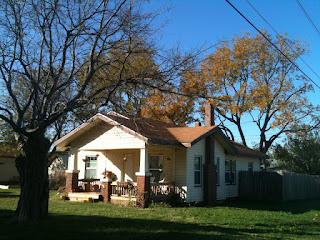 aepilot_jim was the first to arrive.  He was here and as handy as a handle on a pig as I prepared for the party.  Jim gets his own whole post in a bit.  FarmMom and Dad arrived Wednesday evening, and after supper, teh mens went to Home Despot to gather supplies while FarmMom and I went for pedicures.  This is what we call division of labor, in Phlegmish.  We met back at the home improvement place and went through the checkout.  Then home again for an early rise.

Thursday morning, we went for brekky at the local diner and then Jim and FD set to dismantling the porch posts as FarmMom and I made a run into town for paint selection and a few more bits and bobs.  We also did a bit of grocery shopping.  Returned to the house to find J & FD had replaced some wonky boards on my fence and had fashioned steps for the tree house since the ramp was broken and unusable.

A short while later, the ever dear and gracious Old NFO arrived and he changed into his work dungarees and dove into the task with abandon and they toiled away the day on the columns with an impressive number of measures and re-measures. Making these columns appear symmetrical and plumb was no mean feat, as the plinth of the column on each pedestal was well off-plumb, particularly the large one in the middle.  FarmMom joined in on the painting in the afternoon after helping me with the vacuuming and cleaning and other things in the house.  Honestly, the way these four set to addressing all that needed doing was dazzling.

I'd gone for the final food run into town, and came home to see Jim finishing up the last of the molding around the dining room ceiling.  Stingray joined the finish team and wielded a paintrbrush with aplomb and did a bit of the painting.

This almost feels like one of one of those home makeover shows.  I've had to be very methodical (money-wise) in approaching working on the house.  It's a cute structure and I knew it had great potential the first time I saw it, but from the outside, it's always been a little ho-hum and hasn't been very exciting.  I also knew I couldn't afford the kind of skill it would take to execute an authentic Craftsman bungalow look the house originally had.  For this to finally be done and to come out looking so beautiful is breathtaking to me. 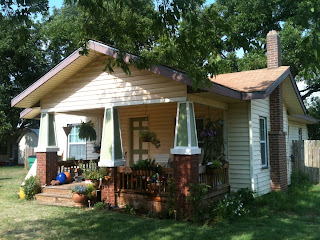 I went out to water my flowers this morning and a breath caught in my throat.  This looks beautiful and style-authentic beyond my wildest hope, but what makes it so much more beautiful is that such lovely and wonderful people obviously love me enough to make all that effort.

To FarmMom, FarmDad, aepilot_jim, and Old NFO:  I love you so very dearly, and even more than the pleasure you have brought to my eye here is the warmth you have brought to my heart with your extraordinary efforts.  I'll think of you four every time I pull into my driveway and I want you to know that each time I do, in my heart I'll be embracing you as the kindest and dearest of people.

Thank you, my good friends.
Posted by phlegmfatale at 11:21 AM

I love those posts as there is nothing like them over here.

I appreciate the sentiment, but I painted less than a square foot all said and done. Heap the praise on them that did the heavy lifting and keep me the footnote to the contribution that I was. ;)

It's lovely, both the porch and the people who made it so. Not least of all, those who live there.

Had a wonderful time and looking forward to more good times.

What a lovely story to go with your wonderful makeover! The house "looks" like you.

Having friends who go the extra mile for you says as much about your personality as it does about their love for you. They are friends to treasure.

Thud - They really are the finest bunch of people!

Stingray - Okay, I removed you from the final bit but left a mention of you in the post. I appreciate the effort, however minor

Rabbit - it was a delight to have you here. I hope to see you again soon.

Gaffer - I do treasure them. It was very nice to meet you and I'm honored you'd come from such a great distance to join in the festivities.

It was our honor to do something for you. Helping each other out is just what you do in a tribe. :)