Sunday night I made two more lots of cranberry/jalapeno jam in what may be the last batch I make of the stuff until next Fall. This is my favorite jam, period. One thing that's been challenging is to make it hot enough for the people who like a lot of heat in their jalapeno products. I do two batches- one which tries to be hot, and the other is a neutered version. This time I did something different. I made both batches on the same night and started with the neutered batch. I cleaned all the seeds and membranes from the peppers for the first lot, and then I put those membranes and seeds in with the massive pile of peppers on the second batch. I think I've at last achieved a fair bit of burn with the jam. 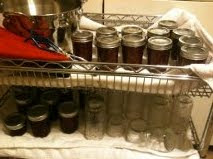 Chopped up in the food processor, I had about 2 cups of jalapeno, or more.

The batch on the lower shelf is the neutered, and ended up only being 9 half-pint jars, and the upper level batch is the hot stuff. Honestly, I like this year-round on biscuits or turkey sandwiches or whatever. The bright spike of pepper is a nice foil for the bitterness of the cranberries, and that seems to balance out the sweetness, so it's not so cloying a jam as the usual fruit stuff. Then there's that perennial party favorite, cranapeno jam dumped over cream cheese and served with crackers. nom nom nom!

Turns out, both cranberries and jalapenos are excellent anti-oxidants, so you can feel slightly less self-indulgent for slathering it on whatever.

Some of this batch is for friends, some is for Tolewyn who helped me with a car battery emergency at the end of December, and the rest will be my personal stash. Amazingly, they still have about 10 bags of decent-looking cranberries at the market in town. I may snag those and make one more batch. It'd be a shame to run out of the stuff, wouldn't it?
Posted by phlegmfatale at 12:01 AM

Excellent taste in jams, darlin'. It's the only one I make, too, and try hard to never run out.