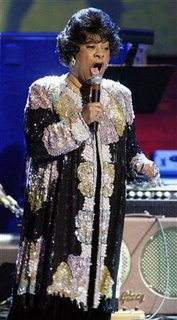 Bit by bit I've been making the blog rounds, but still haven't caught up because I continue to be busier than a whore in church. (yeah, it took me 41 years on earth to come up with that one - I'm a little disappointed in myself - not so quick these days.)

In February 1994, I was in London and happened into Ronnie Scott's Jazz Club on a momentous occasion: Ruth Brown, venerated high priestess of American R&B was making her London debut. Considering she was about 66 at the time, well, it was about time.

[If you're not already familiar with her impressive blues career, you may remember her from the John Waters film Hairspray in which she played DJ/record store proprietress Motormouth Maybelle.]

Anyway, Miss Brown sang the stuffing out of the blues that night, and it was a sparkling evening. I'm so glad I happened to catch it, because it was a rich musical experience from the git-go. Arriving just before she took the stage, we took the last two available seats at the very back of the house. I remember being a little surprised because we had to check all bags/purses at the door-- security, I suppose.

She sang lots of the standards from the R&B catalog, including some killer Bessie Smith (Ain't Nobody's Business) and lots of great cry-in-your-beer kind of music. It was golden.

Now, one thing I've always admired and greatly respected is the way people in the UK recognize the traditions of blues/jazz and how they are part of the DNA of modern popular music. It seems the mainstream American audience forget good music as quickly as it passes through town, and there is no regard for tradition. In England, on lots of stations you'll hear the latest pop tune, then something from the 80s, then Motown - good music has real staying power there.

Where an American audience has it all over the Brits --at least an American audience that's schooled -- may be observed in the call-and-response tradition of channeling feedback to a blues performer. There has to be a natural ease and flow to this exchange, there has to be a sense that the audience is saying "yeah, we know you're driving, and we're coming with you." I see this as intrinsically related to the dynamic of any performer who is setting a musical mood and reliant on the pliability of an audience.

From the audience came occasional rather polite utterances of approval, but it seemed to me something a little less vague was in order. (Caveat: this was before every body and their dog was saying it, including Oprah guests) As the band played some low-profile intro to her next piece - Lover Man by Billie Holiday, Miss Brown started talking, and I could tell it was going to be good, so I waited for my moment. She said, "you know, love can be hard," followed by a lengthy pause as the music played on. I hollered out "YOU GO, GIRL!" in that idiotic way we Americans have of acting too at home in the world. (I promise, I'm not normally obnoxious abroad. I'm just an obnoxious broad.) To my everlasting delight, Miss Brown responded into the microphone: "That's my relative."

Miss Brown died Friday, aged 78. I feel badly that I never took time to write her and tell her what a power-house performance that was and how privileged I felt to hear her at her London debut. She wrote in her 1999 autobiography of how edifying it was to be recognized and so well received in London after so many years in the business. I'm glad she had that, and I'm glad I was a tiny part of it. Even though I was embarking on my training as a classical vocalist, I'll always feel a teeny whit of kinship with her and her abiding love for music.

Miss Brown was a songwriter and song stylist of note in her younger years, but was paid almost no royalties for all her great efforts and acclaim. In spite of this vile exploitation, she never let that steal the joy she found in making music. This speaks volumes of her character and her true motivation in performing, and if it's not about the music, why bother?

So in 1994, Miss Ruth Brown stood there in her spangly sparkly dress, with the wig and the fake eyelashes, and sang about the themes of love and loss that are as ancient and newfound and timeless as any other concept we pitiful humans have ever come up with, and she made it fresh. Not bad for a life's work.

So wherever you are Miss Brown, long may you wave, and you go, girl.
Posted by phlegmfatale at 12:03 AM

Yet, we still have her music and that of all the blues greats. I keep my Sirus radio in the truck tuned to the Blues channel, and I love it all, especially the old 3 cord, 6 beer, blues greats.

Mushy, if this post is a fraction as good as the lady that inspired it, well, that will stand as my tribute. That's cool that you like blues - I should have known you had good taste in music. I think if we could be here in a few centuries, it's more likely we'd see people will enjoying the blues of the 20th century than any of the pop - it's has a super-stability that renders it unforgettable.

Nice post. Thanks for commenting on Tuwa. (Nice name, too, phlegmfatale. I don't know whether to fall in love or duck.)

What a great story! Im sure Miss Brown had you in mind when she made the comments about the reception she had in London.

What a powerhouse she was!

I've got some of her music on compilation discs. I never knew much about her. Thanks for the video and the great story.

Good story, well told. Did you ever think to switch alliances and go into blues yourself?