My carry gun in recent years has been an Airweight J frame, but in recent times I've wanted to explore upping the firepower of what I'm carrying. Himself gallantly bequeathed me the gun that killed Santa Claus, and the search was on for a suitable holster for same. Having long admired the look of Dennis Badurina's holsters over at Dragon Leatherworks, I was thrilled to acquire a quite smart-looking Flatjack with gorgeous stingray hide inset detail. 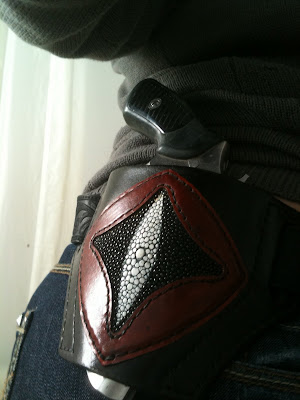 I don't claim to be any kind of gun expert. Though I love to shoot, I don't shoot nearly so often as I would prefer. I'm just a regular, rapidly-hurtling-into-middle-age woman with tastes related to comfort as well as style and sheer functionality. I'm short but I'm not tiny, and though I do have an approximation of a waistline, I have a junky trunk and angular things don't tend to fit well on my person. Generally, I've carried the J frame in an inner pocket of my handbag, but I feel like my posture is being affected by that carrying method. A couple of pounds wouldn't seem like they'd make that much difference, but they really have. The J frame seems sticky-outie in that small holster when on my belt, and was bad to catch on clothing due to the angle. Other methods for carrying the J frame are in the offing, but that will be talk for another time.

The Dragon Leatherworks holster arrived much sooner than I expected it, and it was visually and tactilely pleasing. The craftsmanship is quite well-executed, and the color options make for increased potential to put your personal touch on what you are wearing. I can't say enough how beautiful the stingray hide is. If I could, I'd cover a wall in the stuff-- it's that neat, and it seems far more durable than I would have imagined it to be. I also take the pretty underwear approach to holster aesthetics: though I would not show all and sundry the very pretty bra I'm wearing, I like knowing it's there. Same thing with my holster-- I pray there's never need for anyone around me in a non-sport-shooting setting to know that I'm even carrying, but I like knowing that the holster is something in keeping with my own style. To this end, the flatjack is very satisfying.

As for functionality, as you see in the photo above, the Flatjack sits nicely against my round hip, and yet the butt of the pistol does not cant out at an angle that would grab excessively on other things. In this photo, I have a long sweater pulled up to reveal the gun, but I can actually wear that sweater down over this pistol/holster combination without printing.

The pistol fits smoothly and snugly into the holster, but I also don't have to struggle to pull it out.

The best thing I can say about this holster comfort-wise is that I don't notice it being in the way or uncomfortable. I have started to notice not having an ache between my shoulder blades due to a heavy handbag, and I don't seem to have any ill physical effects from the weight being held snugly against my person. Neither the pistol nor the holster dig into my ribs or my side or my hip, which was something I worried would happen with my short waist and this larger gun.

I think this design and model of holster is an excellent value, and I hope Dennis has a long and distinguished career in this art. I definitely plan to buy his holsters for more of my pistols in future.
Posted by phlegmfatale at 12:01 AM

Heh. I've made the Underwear Argument to quite a few folks before. It's pretty much a perfect parallel as far as I'm concerned. Although, don't try to make that argument to a committed pair of aging lesbians - learned that the hard way! :P Also, I'm really happy to see Dennis doing well for himself.

Beautiful holster. The stingray hide adds a lovely detail. For what it's worth, I know you can purchase stingray hides at Tandy Leather. They come in a variety of dyed patterns.

I hope you and the pups have a Merry Christmas.

Michael: Someday I'll buy some pretty underwear from you. ;)

Phlegmmy: Next time the wife and I are out your way, you'll have to show her how you do this. She has the .38spl version of the same gun. She is, however, convinced that there's no way she could possibly carry it.