Have you looked a photos of ancient Roman aqueducts still standing around the planet? A few are even still functional, after 2000 years, including at least one in Rome itself. Impressive.

Here's a great site that shows examples called Bridges that Babble, and features 15 amazing Roman aquefers. The scale of the architecture is breathtaking, and the skill of the craftsmen who built these water delivery systems is nothing short of exquisite. 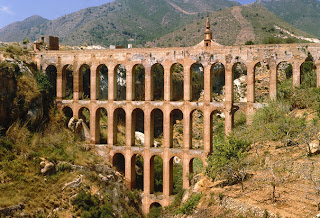 I also found this one online at Nerja, on the Southern coast of Spain.
Posted by phlegmfatale at 12:01 AM

We were there, years ago, when #1 Son was 2. You hang a left off the coastal road there if you want to get to Grenada.

I would have wanted to go see the aqueduct, if I had known. Blast it, Al Gore - you were too slow!

Interesting that the aqueduct had four levels. The Romans typically topped out at three.