One of the perks since I joined the company is that I was assigned to plan all parties and gifts for residents. I didn't realize how much fun that would be, but I do love entertaining. If you host similar gatherings repeatedly, you work certain details down to a science and each event is easier than the last. For the blogger party last week, I called on all my mad hostess skills to pull together the food and to tidy up my nest. My goal was to have the apartment ready by Wednesday, which would pretty much guarantee it would be ready by Friday and I wouldn't have to rush around like a lunatic on Saturday. No, it doesn't make sense to me, either, but it usually results in a fuss-free day-of-party for me. Ideally, the day of the event I can work on painting my fingernails or loaf about googling "bacon-wrapped spam" or some such.


For the gunblogger wingding, I planned for a limited but (hopefully) popular array of beverages. I had a handful of soft drink varieties, bottled water and bottles of Ramune in case any kiddies showed up. I planned to make iced tea. Folks started arriving and I had a pot of water on the stove which never would boil, and, coincidentally, I couldn't find the teabags. I joked one guest that I would probably find the tea that evening. Sure enough, rummaging around in the pantry some hours later, I found the box of teabags. Oh well. At that point, I had begun brewing the coffee which Old NFO had so obligingly brought. Folks seemed happy, and the only milkish thing in my fridge -- heavy whipping cream -- was the delight of more than one guest. I only had sugar of the brown variety. Still, guests who desired coffee in its various forms did not go wanting.


Not so, tea drinkers.


Among the esteemed gentlemen in attendance, LawDog (dashing, that one is!) decided a n 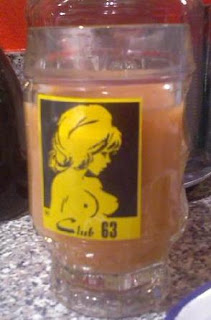 ice cup of hot tea was in order. I was across the room and directed him to the tea in the pantry, but offered that I knew there was proper tea up in my office. No, no, he said, this would be fine. I knew a smart fellow such as he could work a kettle, by golly, so I resumed my conversation. The teakettle whistled, and I noted LawDog shifting through the remaining glasses in the cabinet, all the mugs and teacups having been claimed for coffee earlier. The sole remaining glass with a handle was this one:


Yes, such are the spoils of shopping at Oak Cliff's Thrift Town over on Westmoreland. I got 4 or 5 of these for ten cents each. Score!


I watched, bemused, as LawDog pulled this from the cabinet, raised an eyebrow and placed it carefully back on the shelf as he craned to see another mug or teacup. Alas, no other handled vessel was to be found, and with a sigh, he resigned himself to the girlie mug.


The teakettle began to whistle, and I paid the teamaking no mind until I glanced across the room to see Sir Dog grimace full-mouthed and holding his tea-filled mug out, regarding it quizically. 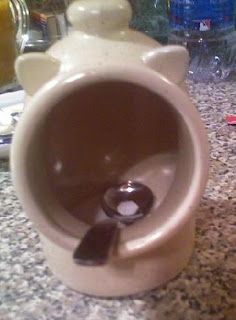 Horrors! A hostess-from-hell moment was erupting before my very eyes. After all my careful preparations a treasured guest was having not-as-advertised results from his beverage. Lawks!
I did not see what happened to the tea in LawDog's mouth, but methinks he did not swallow it, and for good reason. For he'd ladled about a week's worth of sodium into his tea from one salt pig which sat perched atop a jar of matches. Yes, it looked like sugar, but was salt. Apparently Mr. Dog has never heard of salt pork.


One giggling attendee rushed over to the salt pig to snap a photo as twitters of recognition and laughter swept the room. Here was a moment for which I had not prepared, or had scarce imagined. Um. Uh. Er.

Please accept my humble apologies. [Blackadder style, pronounced a-po-lo-gees (like geese without the last e)] Next time you darken my doorway, there shall be fine tea in abundance and pure-dee sugar in a well-marked container.
Pinkie swear!

Here's a re-enactment of the whole sordid affair. Note the sinister gaping maw of the salt pig, porthole to blood pressure hell and water retention horrors. See the comely lass casting her eyes away, seemingly innocent of any wrongdoing, her bouffant perfectly preserved for posterity. Actually, I blame the pig. That's my story, and I'm sticking to it. 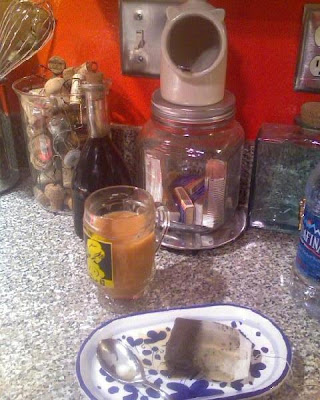 That was a wonderful 'salty Dog' story if I ever heard one, lass. Arrrr, me likes them tales indeed, suits me to a tea in fact.

My mother had one of those for years - I never knew it was called a salt pig until today.

They are ideal for those of us who like to season by hand & to hell with all the "health nazis" who tell us that salt is harmful, it has had no effect on me!

Phlegmmy, what I got a kick out of was when he showed folks how to open those funky soda bottles... and everyone who'd been drinking them all day went "ohhhhhhh."

Never mind, Phlegmmy. Lawdog and I, being former colonial types, do like our cups of tea. We'll educate you in the rituals of sugar ("Lump or granular? One or two?") versus honey, lemon vs. milk, leaf vs. bag tea, what to heat first, and so on. I tell you, the Japanese tea ceremony has nothing on the English when they get all Victorian on you!

If you want to really blow LD's mind, make up some of my family mix. In a teapot, combine 50% Ceylon black tea, 50% Keemun China tea, and a healthy pinch of Lapsang Souchong (for that smoky overtone). Nectar of the Gods, I tell you!

(Oh - and all of the above should be leaf rather than bag teas, of course. Don't forget the strainer.)

Lin - well, just be sure not to strain yourself laughing, dearie!

DBA Dude - well, ya gotta die of something! I agree - there's something wonderfully satisfying about having a handy vessel of salt for throwing a little extra in the pot. Plus they're kind of cute!

Farmgirl - that WAS funny!

Peter - Thanks for the schooling. I'll get there one of these days. Will stock up on the Jaffa cakes, too, but will note to only trot them out for special guests.

They don't call you fem fatale for nothing.

Too funny, I must have missed that one... Peter, you lost me after teapot! :-)

That's why I drink black coffee...

Oh, to have been there to see that!

Old NFO - you should have seen it.

Christina - I was captivated and horrified all at the same time...

Bahahahaha! I love those tittie mugs!

An experience for everyone to remember, I'm sure. Wish you had somehow caught it on camera. ;-)

MiniKat - I like 'em, too. If the event had been captured on camera, I suspect the camera would have been put out of commission forthwith

DirtCrashr - Yes - it's one of my favorites. I have the others packed away in a box somewhere... they'll turn up one of these days.