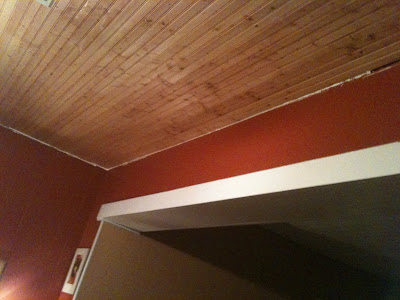 I haven't painted the primed corner blocks yet, but before they can go up, I needed to caulk along the edge of the ceiling where the walls meet. There are gaps of varying degrees, but some are quite significant, and I really think that's where a lot of air has circulated from outside (or TO the outside, depending on the season). I am hoping that by my birthday I'll have the cove molding up, so to that end, I have about a case of caulk laying about the place. 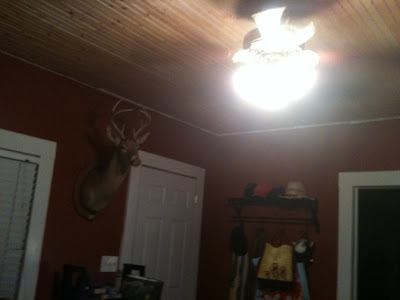 Wednesday night, I decided I really needed to do something-- anything-- that made me feel I moved forward with the whole task. I was in my skirt and knit top I worked in Wednesday, and I dragged a stepladder over and began caulking. I thought I'd just do one can-- one can would make me feel I'd accomplished something.

Well, I reached the end of that can and I still wanted to do more, so I opened up another can. I got a little better than half the lines done in the living room, and I'm pretty pleased with that. I killed a few skeeters, too, while I was up there. Didn't get any caulk spooge on my clothes, either. I am, however, running low on nitrile gloves. Yes, I buy those in the 100 pack, these days.

They are great, too, when you are working with messy stuff in the kitchen, too.

If I could make it to Texas, family OTW would make short shrift of the task!

Good for you :-) Progress you can SEE and appreciate, and one step closer to done!!!