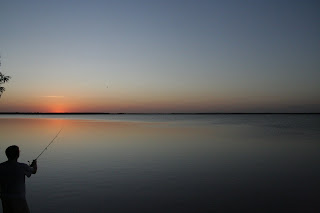 Had a great time fishing the local lake about 8 or so miles from my house. Waited for the mercury to dip below 100 before venturing out, so it was nearly nightfall when we arrived at the lake. I saw primordial scale mosquitoes. Blood drunk(apparently) they were pretty easy to kill. Still: ew. Then the bats began to appear.

I'm loving the new rod&reel. It's nice to be in the country and be able to pick up and just go fish for an hour or so if the mood strikes. I got a few really good bites(other than the skeeters), but didn't catch anything. It just happened that the two best catches on the lake that day were fishing on either side of me.

Good times. Yes, I shall take this camera (my good one) along next time I'm fishing at the ferrety lake. If you click to embiggenate, you can 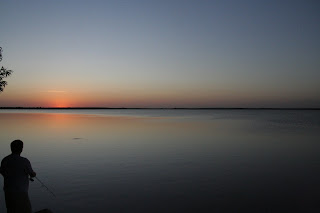 see the lure in the air of the first photo, then the circles rippling where it landed (watered?) in the third photo.

Golly, I'm so glad it's Friday. Why does the week always seem so long after a holiday weekend?

It looks so very still!

Images can sometimes lie, but I'm thinking it was very quiet around this time...