Once again, I'm doing the work for you, darling, crawling into the pathogen-riddled trenches of celebrity gossip to filter out the best bits for you. Because I care.

Apparently, Madonna's daughter Lourdes is a massive fan of the young band The Jonas Brothers. These guys are 15, 19 and 20, and wear rings as a symbol of their promise to remai 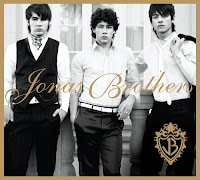 Anyway, at the VMA awards this week, ribald Brit host Russell Brand jokingly stated "They can have sex with any woman they want but they choose not to. That's like Superman just deciding not to fly and to go everywhere by bus." Later in the ceremony, American Idol winner Jordin Sparks responded at the mike ""I just want to say, it's not bad to wear a promise ring because not every guy or girl wants to be a slut, okay?" I think Jordin is about 18 or so, and I think it took a lot of guts to make that remark, standing up to the host. Well done, Jordin. Brand claims MTV has already asked him to host the awards next year. Hmph.
Apparently, the powers-that-be at MTV managed to persuade Brand to cut the gag from his act about Sarah Palin giving her daughter the electric chair for getting pregnant. Uh, good call, folks. *much eye-rolling here*

Yes, MTV is rife with inappropriate sexuality and lewdness. I'd say everything has its place, but the whole of MTV is marketed toward the junior-high demographic, and I call that mature/immature composite entirely inappropriate. And then to retain a host who is a comedian known for material overtly sexual in nature, however florid and Edwardian the delivery, I think you have a recipe for a supremely offensive package. *ahem* I wonder how any parent could allow a young child to watch this stuff unedited?

I'm not even remotely a prude, but if I were a parent watching this with a child, we'd DVR it, and start watching about 2 hours after the program began, Mama would hold the remote and forward from one musical performance to the next, skipping the insulting filth in between, and skipping some of the insultingly filthy performances. Sheesh.

So, anyhoo, never-say-AARP Madonna's daughter Lourdes is reportedly obsessed with the 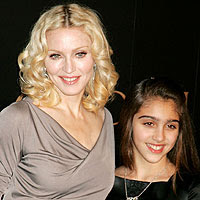 chaste Jonas brothers. (If your mom was embarrassingly sexual and youth-worshiping, and publicly so, wouldn't YOU be obsessed with the Jonas brothers? or become a nun?) Jonas brothers were set to appear in London the very night of the opening of Madge's tour, and Lourdes very much wanted to see TJB rather than attend mummy's show. There have been rumblings for years that little Lourdes, now 12, is very wilfull, doesn't know who her mum is and frankly doesn't care-- she apparently came out ready to spar. No word on who won that battle, but I can imagine that judging by TJB's message, the shock and insult for Madonna is manifold. I expect when Lourdes really rebels in her teens, there'll be no end of horn-locking with those two, and I expect there'll finally come a day when Madonna feels her age.
It's not that I'm gleeful that Madonna will (likely) be humbled by a relationship, for a change. It's just there's a toothsome symmetry to the idea of someone who has preached overt sexuality to the masses for 30-ish years having a child who is averse to the same exhibitionstic ways.

Whatever the outcome, I hope little Lourdes manages to have a happy life.
Posted by phlegmfatale at 12:01 AM

My twins (14) are Jonas Brothers fans. I suppose there are worse celebrities they could be panting after!
Lourdes certainly looks like her mama, but hopefully (and apparently) doesn't take after her in other ways...good for her! I hope she sticks to her guns.

Tis a grand public service that you are providing, leaving all of us from having to trawl the cesspools of "celebrity" gossip. Many thanks.

Ah, the "joys" of raising a daughter!
Having BTDT with a "strong minded" female child, I can attest it IS a Battle of wills. I have compared it to herding cats; psychotic BIG cats on the trail of wounded prey. And it starts when they are about 11 and lasts 'til they're about 17.5.

I'm gleeful M is goin' to have her hands full with Lourdes. You GO, L. Give her HELL!

If Islamofascists bombed MTV and put it out of commission, I'm not sure I'd care too much.

I can't imagine anyone wanting to attend their own mother's concert, to be truthful. I'm sure one of Madge's handlers could take her to see the Jonas Bros instead.

Good stuff. But Madonna struck me as a little long in the tooth when she crucified herself for the millionth time. Ok, ok. You're blaspheming. We get it already.

And while I have no idea who the Jonas brothers are or what they sing, I think it's nice that they're not boy-whores.

I heard Jordin Sparks said something back to the host, but I didn't know what it was or what the context was -- good for her!